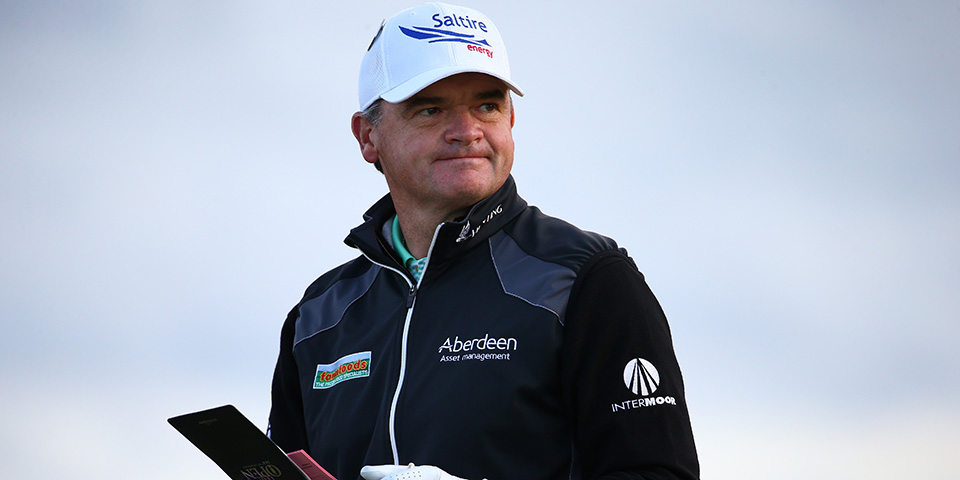 He may officially be classed as a senior in golfing terms but Paul Lawrie is not one to kick back and doze off.

With the kind of tireless energy that those Duracell bunnies used to display in adverts for long-lasting batteries, the 53-year-old keeps on going with all manner of endeavors and enterprises. And it’s not just golf that enjoys his presence. This week, in his native Aberdeen, Scotland, the 1999 Open champion will be on the tennis court sidelines as a guest coach to the Murray brothers, Andy and Jamie, in the Battle of the Brits.

“As it’s in Aberdeen they’ve obviously thought, ‘right, what idiot can we get from the city to help out?” said Lawrie with a self-deprecating chuckle.

This tennis lark will be a bit of fun away from Lawrie’s serious business of developing golf in his homeland. On that front, the Scot continues to serve up, well, a few aces. The other day, it was announced that the winner of his flourishing Tartan Pro Tour order of merit next year will gain promotion to the Challenge Tour, the second-tier of European professional golf.

For a mini-circuit that was only formed in 2020, amid the ravages of the COVID pandemic, it’s a significant progression in its development.

The demise of the PGA EuroPro Tour this season after 20 years offered an opportunity to fill a void and Lawrie and his team have seized the chance.
When the Tartan Pro Tour launched a couple of years ago, to provide playing opportunities when lower-level circuits had been decimated due to COVID, it had six events. In 2023, it will boast 13, 54-hole tournaments at some tremendous venues across Scotland.

Scotland’s Paul Lawrie kisses the British Open trophy after his victory in the playoff during the 128th Open Championship at Carnoustie in Scotland, in this July 18, 1999 file photo.

“This was always the dream,” said Lawrie. “When we started, we wanted a pathway for players from our tour onto the Challenge Tour. We were actively trying to get a Challenge Tour spot before the EuroPro Tour closed down but there weren’t any additional spots and, to be honest, we thought we might never get one. But suddenly we woke up one day to the news that the EuroPro was being discontinued. Now, I’m certainly not wallowing in that tour’s demise. It was a huge pity but this is business and there was an opportunity for us. They (the Challenge Tour) will review it every year. It’s up to us to grow ours as much as we can to then try to get more Challenge Tour spots. That’s our new goal.”

With more connections than the railway network – well, when they’re not on bloomin’ strike – Lawrie has attracted some sturdy partners to bolster his project.

“When you have good companies and backers behind you, then you’ll go places,” he added of this valuable assistance. “We have Farmfoods and the R&A, for instance. There are things you can do with that kind of support and you can do it pretty quickly.”

As a come-all-ye playing platform for various walks of golfing life, Lawrie’s tour attracted plenty of female entrants over the last couple of seasons. While no discussions have taken place about a possible tie-in with the Ladies European Tour, Lawrie would be keen to open a dialogue.

“We are willing to work with anyone and would certainly have that conversation,” he said. “If there’s an opportunity to progress the career of any golfer then I’m open to discussion.”

Combining competitive action on the over-50s circuit with his myriad ventures back home, Lawrie, who won again on the Legends Tour this summer, takes great pride in his own circuit which is offering a way up the professional ladder.

“It’s probably been the most satisfying thing I’ve done,” he said. “When we first looked at it, all we wanted to do was provide something to play in during COVID. We sort of fell into it a bit. Starting with six events was manageable. Had we gone in with more it would have been a huge undertaking but we have grown as the tour has grown. I spend more time on this than anything.

“If I’m not playing golf, then I’m in my office trying to get people involved with our tour and constantly working to keep it moving forward. To see it get to the level it has in such a short period of time is hugely rewarding.”