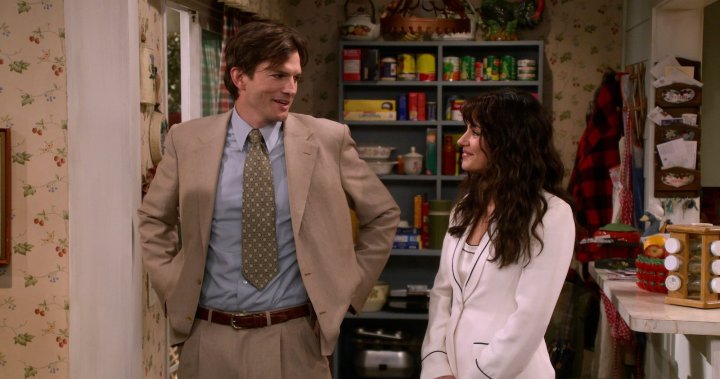 The gang from That ’70s Show is back together again.

As the title suggests, That ’90s Show is set 20 years in the future, as Red and Kitty Forman reopen their Point Place, Wisc., basement to a new generation of teenagers.

The new show focuses on the misadventures of Leia Forman, the teenage daughter of That ’70s Show characters Donna and Eric. Leia (Callie Haverda) has been shipped off to her grandparents’ home for the summer of 1995.


And while an earlier teaser for the reboot showed recurring stars Kitty (Debra Jo Rupp) and Red (Kurtwood Smith) welcoming a host of new characters into their home, Netflix’s latest trailer gives viewers a long-promised glimpse of what the original cast has been up to since we last saw them.

See also  “We Cannot and Will Not Stand By”: Abortion-Rights Activists Brace for West Virginia’s Dystopian, Near-Total Abortion Ban

First off, we learn that Fez (Valderrama) has opened his own chain of hair salons called “Chez Fez” — which he advertises with a wonderfully cheesy commercial.

We get a glimpse of Jackie (Kunis) and Michael Kelso (Kutcher) looking all grown up in business suits. The first canon couple from That ’70s Show now have a son, Jay Kelso, who appears to take after his dad and isn’t afraid to smoke pot in the Formans’ basement.

We also see Eric (Grace) and Donna (Prepon) chatting with Red and Kitty in the kitchen, where Red shows he hasn’t softened at all with age, and Kitty is as chipper as she’s ever been, making plans to buy the new generation of teens Doritos, Fritos, Tostitos and any other -itos she can think of.

There’s even an appearance by Tommy Chong, who reprises his role as Leo, the insightful and chronically-high owner of the Foto Hut.

Absent from the original cast, however, is character Steven Hyde, who was played by Danny Masterson. Masterson stood trial earlier this year for rape charges, but a mistrial was declared over a deadlocked jury.

That ’90s Show begins streaming on Netflix on Jan. 19.