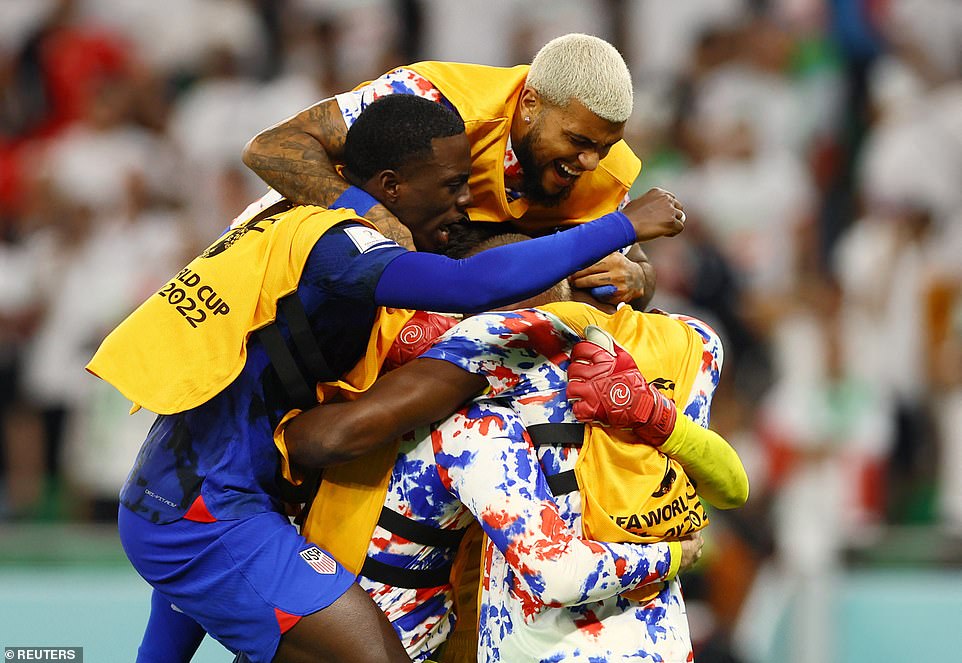 The quadrennial goal of the United States men’s national soccer is to advance beyond the World Cup’s group stage.

Notwithstanding the country’s disappointing failure to qualify for Russia in 2018, Americans are accustomed to reaching the World Cup, having done so seven times in eight chances since 1990.

But whereas qualifying against the likes of Cuba and Belize has been relatively easy, actually winning World Cup matches has been far more difficult. All-time, the American men are just 9-8-19 in World Cup play.

And even when Team USA does advance beyond the group stage, the knockout rounds have been unforgiving. Outside of a fluke semifinal appearance at the 13-team tournament in 1930, the Americans have only reached the quarterfinals once, in 2002. Along the way, the US has been humbled by everyone from traditional soccer powers Italy, Brazil, and Germany, to less-heralded teams, like Ghana and Belgium in single-elimination World Cup games.

In Qatar, the US has a chance to break from its disappointing history, starting with Saturday’s round-of-16 match with the Netherlands.

Fortunately, there are reasons for optimism: Team USA stunned favorited England with last week’s draw, keeping the Three Lions on their heels for most of the match, before earning a hard-fought, 1-0, win over Iran in Tuesday’s pressure-packed Group B finale.

Of course, there are reasons for pessimism as well, including injury to star Christian Pulisic, not to mention 92 years of disappointment on the pitch. DailyMail.com looks back on Team USA’s often-disastrous history in the knockout stages…

United States players celebrate qualifying for the knockout stages after beating Iran, 1-0, on Tuesday in Doha 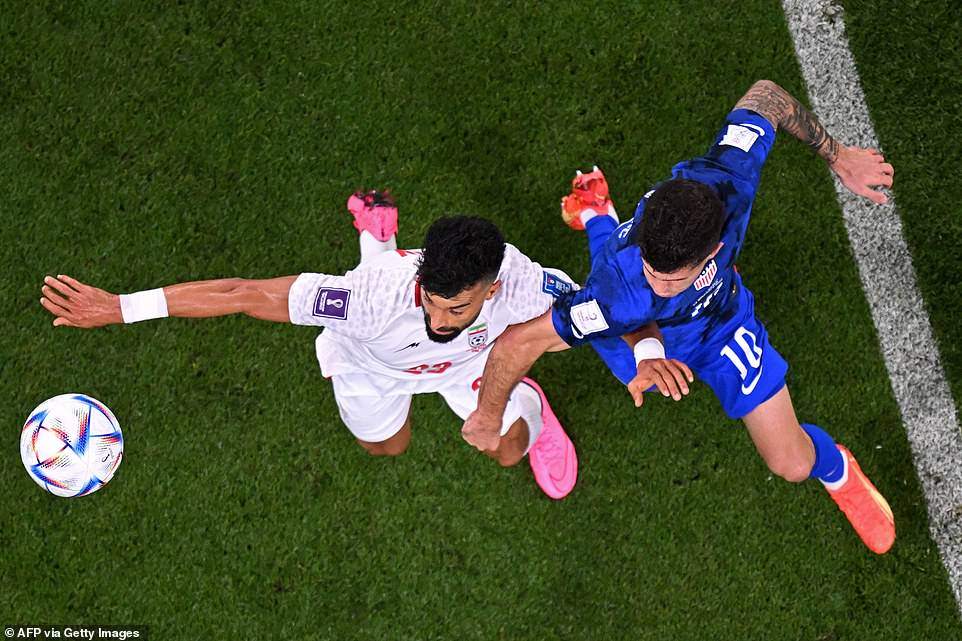 The country’s World Cup debut in Uruguay in 1930 remains its deepest tournament run, although that comes with a Jupiter-sized asterisk attached. That year’s inaugural tournament was only supposed to include 16 teams, but was further diminished by the late withdrawals by Egypt, Japan and Siam, leaving the US with relatively easy group-stage matches against Belgium and Paraguay, both of which the Americans won 3-0.

That sent Team USA into a semifinal matchup with Argentina, which handed the Americans a 6-1 defeat en route to the championship game. USA’s only goal came in he 89th minute, and it was actually scored by Scottish-born Jim Brown, who would go on to play for Guildford City F.C.

It would be easy to congratulate the Americans on a second straight knockout stage berth, but the 1934 tournament in Italy included only 16 teams, so the round-of-16 was actually the first stage of the tournament.

It did not go well for the US, which faced the host and eventual-champion Italy, losing 7-1.

Team USA’s lone goal was scored by Aldo Donelli. The country would not score another goal in the World Cup until 1950, and wouldn’t reach the round-of-16 again for another 60 years. 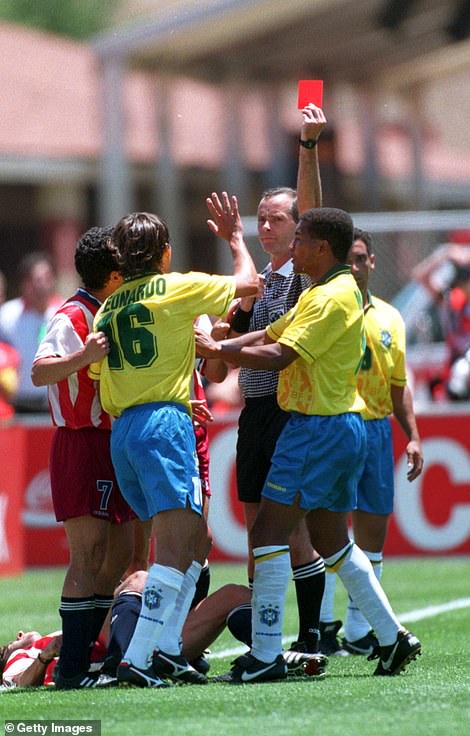 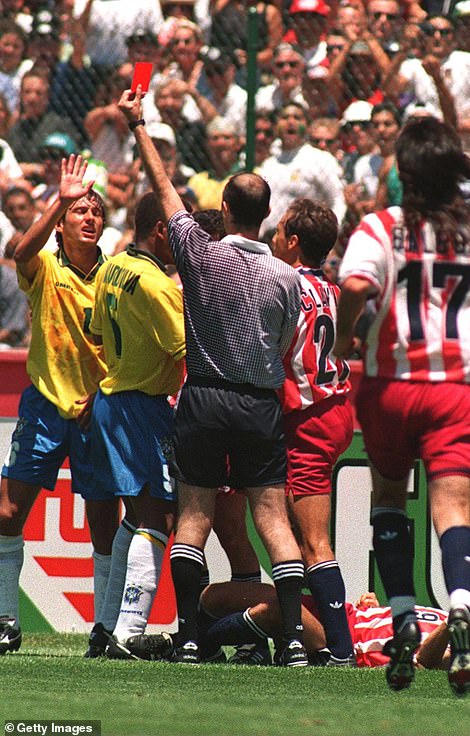 The US gave Brazil one of its toughest matches of the 1994 World Cup, highlighted by a brutal elbow by defender Leonardo against US midfielder Tab Ramos, who suffered a fractured skull. Leonardo was subsequently given a red card, suspended four games, and fined $80,000 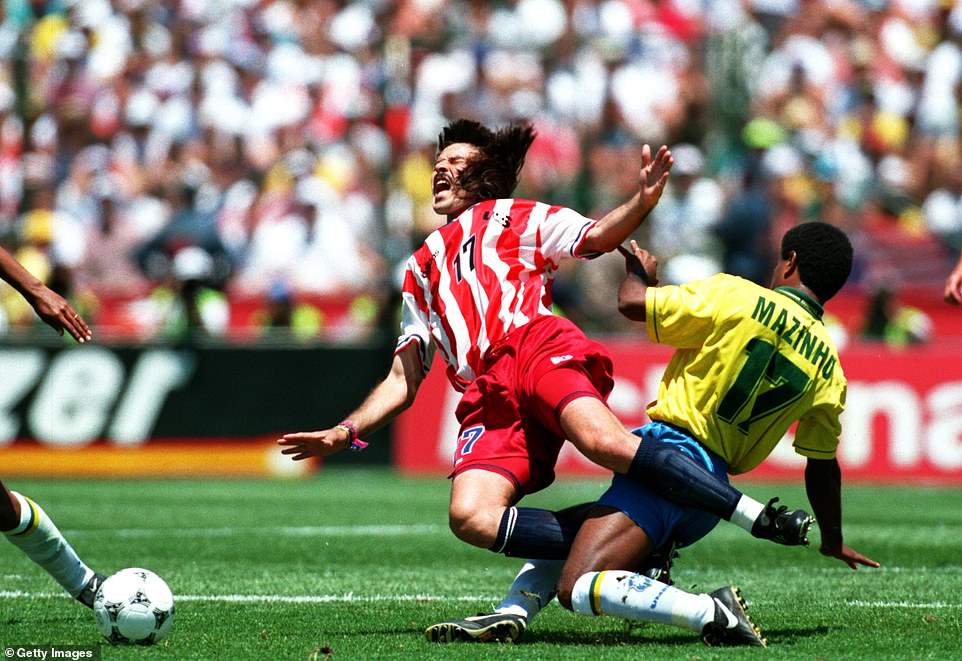 Marcello Balboa is taken down by Brazil’s Mazinho during their 1994 World Cup clash in Palo Alto, California 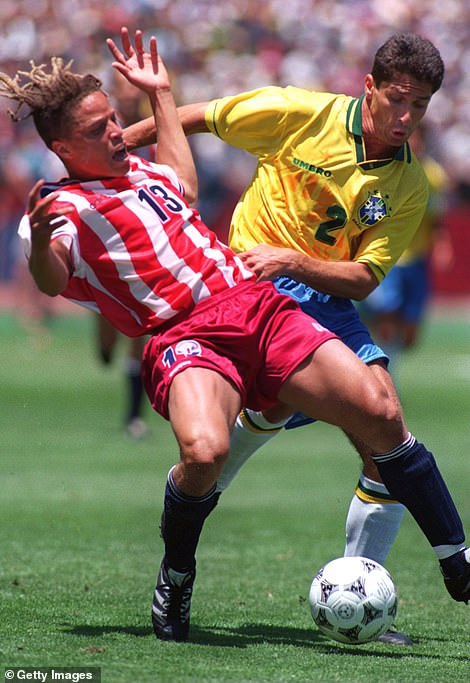 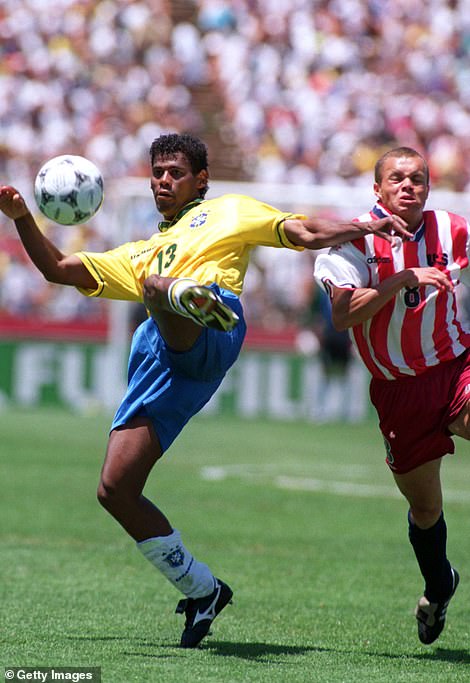 The US benefitted from its homefield advantage in 1994, famously upsetting tournament favorites Colombia on an own goal before advancing to a round-of-16 meeting with Brazil, the eventual champions.

Remarkably, the US gave Brazil one of its toughest matches of the tournament, highlighted by a brutal elbow from defender Leonardo against US midfielder Tab Ramos, who suffered a fractured skull. Leonardo was subsequently given a red card, suspended four games, and fined $80,000.

The US played with a man advantage for the second half, but the Brazilians pulled ahead in the 73rd minute, when Romario fed Bebeto for the game’s lone goal.

Afterwards, Leonardo apologized to Ramos, who was knocked unconscious and briefly hospitalized. 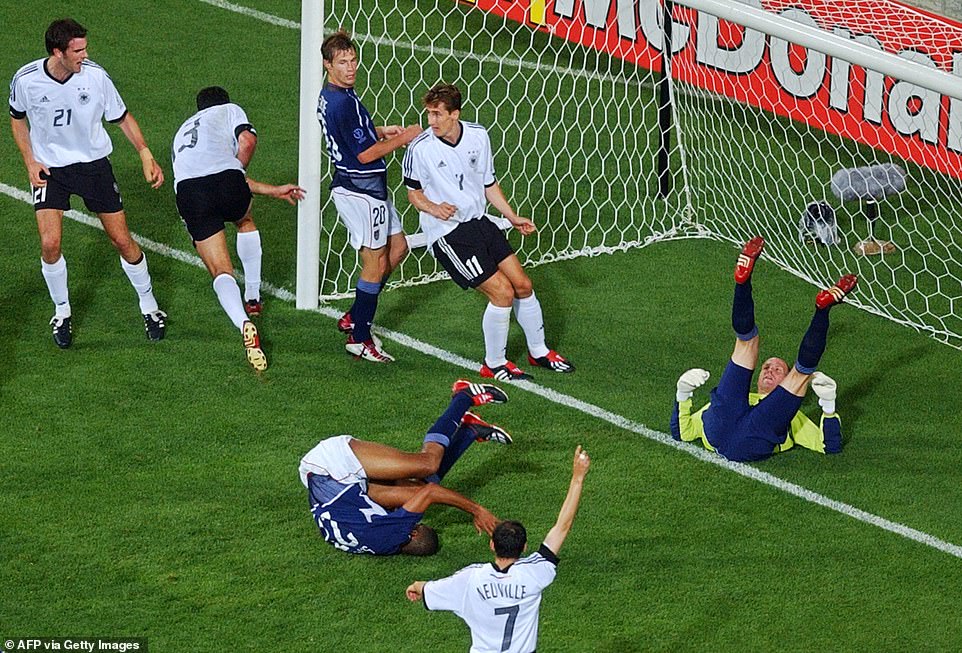 Germany’s Michael Ballack (second from the left) turns to celebrate after scoring in the 39th minute on June 21, 2002

If the US has a proud moment on the World Cup stage, it’s the team’s quarterfinals run in 2002, when the Americans upset Portugal in the group stage and rival Mexico in the round of 16 to set up a match with heavily favored Germany.

The US created several chances in the early minutes. A shot by Frankie Hejduk was saved by legendary German goalie Oliver Kahn before a Landon Donovan opportunity was thwarted by defender Christoph Metzelder. 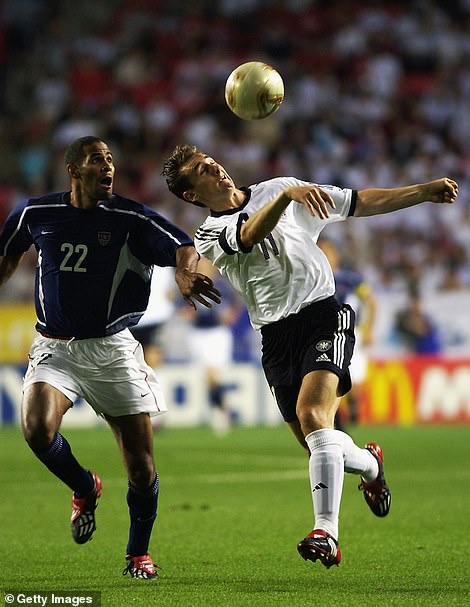 Kahn would make a brilliant save on another Donovan shot minutes later, but just as the US seemed to be seizing the momentum, Michael Ballack scored off a free kick from teammate Christian Ziege to give Germany a 1-0 lead.

The US wasn’t done. Current Team USA coach Gregg Berhalter nearly scored off a corner kick from Claudio Reyna in the 50th minute, but the shot was saved by an apparent handball by Germany’s Torsten Frings. Alas, there was no whistle on the play, and America’s opportunities dried up as the Germans focused all their efforts on defense.

‘As the corner was coming in I said, I’m going to gamble and move away from my opponent toward the center back-post area,’ Berhalter told Sports Illustrated years later. ‘The ball fell right to where I was gambling on, and I had a chance to lunge at it with my left foot. [I made] good contact and it was going into the goal; it beat the goalkeeper [Oliver Kahn], but [German midfielder] Torsten Frings put his hand out and blocked it right on the line.’

‘A foul can only be given if it is deliberate hand-to-ball and not ball-to-hand,’ Dallas said.

However, veteran referee Howard Webb disagreed with Dallas, his mentor, in a later interview.

Germany would ultimately reach the finals, where the team would lose to Brazil. 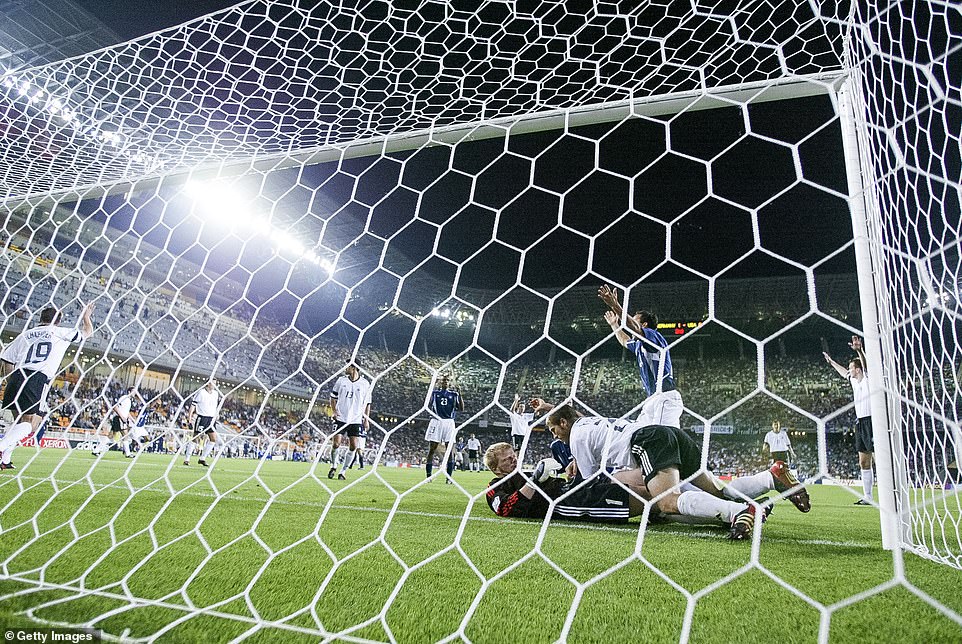 Current Team USA coach Gregg Berhalter nearly scored off a corner kick from Claudio Reyna in the 50th minute, but the shot was saved by an apparent handball by Germany’s Torsten Frings. Alas, there was no whistle on the play, and America’s opportunities dried up as the Germans focused all their efforts on defense 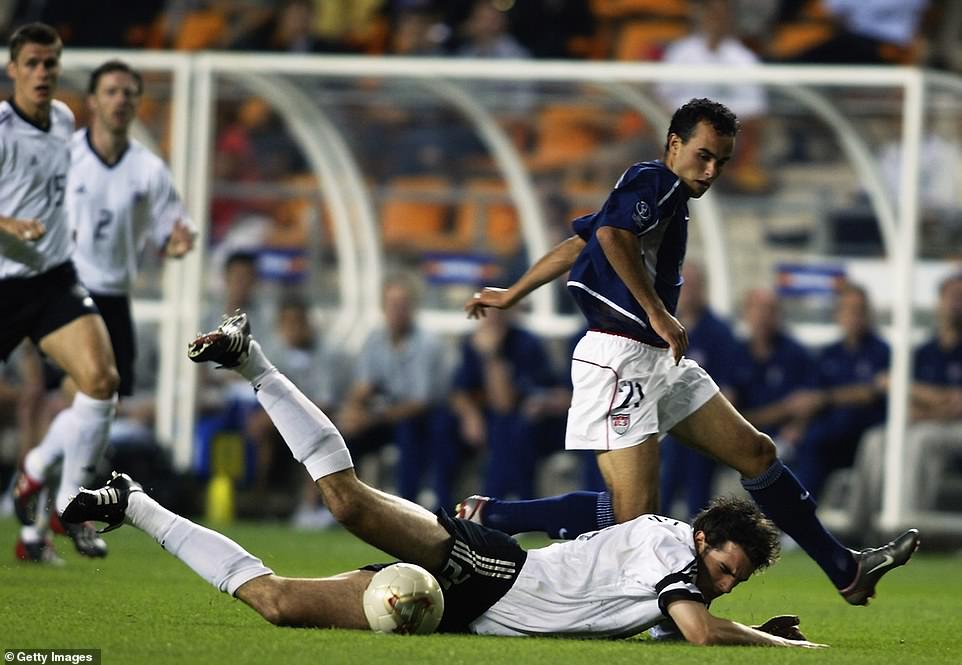 Christoph Metzelder of Germany falls under the challenge from Landon Donovan of the USA during the FIFA World Cup Finals 2002 quarterfinals match played at the Ulsan-Munsu World Cup Stadium, in Ulsan, South Korea 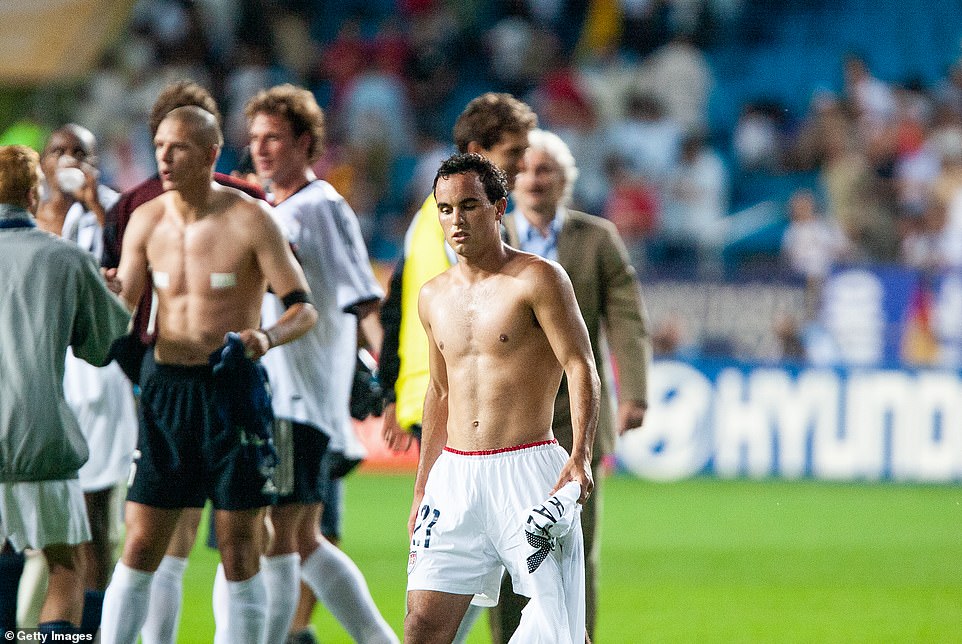 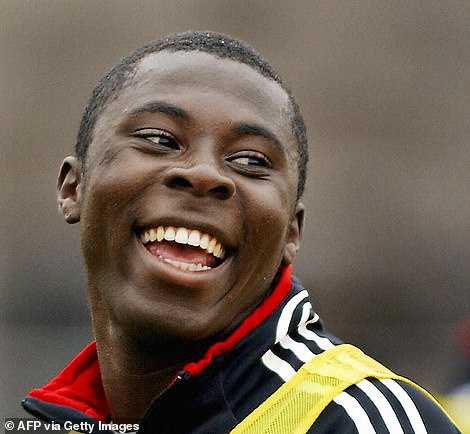 The excitement coming off the 2002 World Cup quickly faded for the Americans in 2006, when they were eliminated in their group stage finale by Ghana – a team playing without Freddy Adu (pictured), the supposed soccer prodigy and native Ghanian who became a naturalized American citizen, only to fail to meet expectations

The excitement coming off the 2002 World Cup quickly faded for the Americans in 2006, when they were eliminated in their group stage finale by Ghana – a team playing without Freddy Adu, the supposed soccer prodigy and native Ghanian who became a naturalized American citizen, only to fail to meet expectations.

Four years later, the Americans’ budding rivalry with Ghana was renewed in the round of 16 after the US tied England and Slovenia in group play before beating Algeria.

But if Team USA was aiming for some revenge, those hopes were quickly dashed as Ghana’s Kevin-Prince Boateng scored five minutes into the match.

Donovan would tie the game on a penalty kick in the 62nd minute after Clint Dempsey was pulled down in the box, but Ghana quickly regained the momentum.

‘We had already expended a lot of energy at that time,’ US coach Bob Bradley said. ‘I think we put ourselves in trouble with giving up the early goal again.’

Ultimately Ghana would send the US packing – again – when Asamoah Gyan scored three minutes into overtime.

‘A stinging, tough defeat,’ Bradley said. ‘We knew Ghana was a good team and we didn’t get the job done.’ 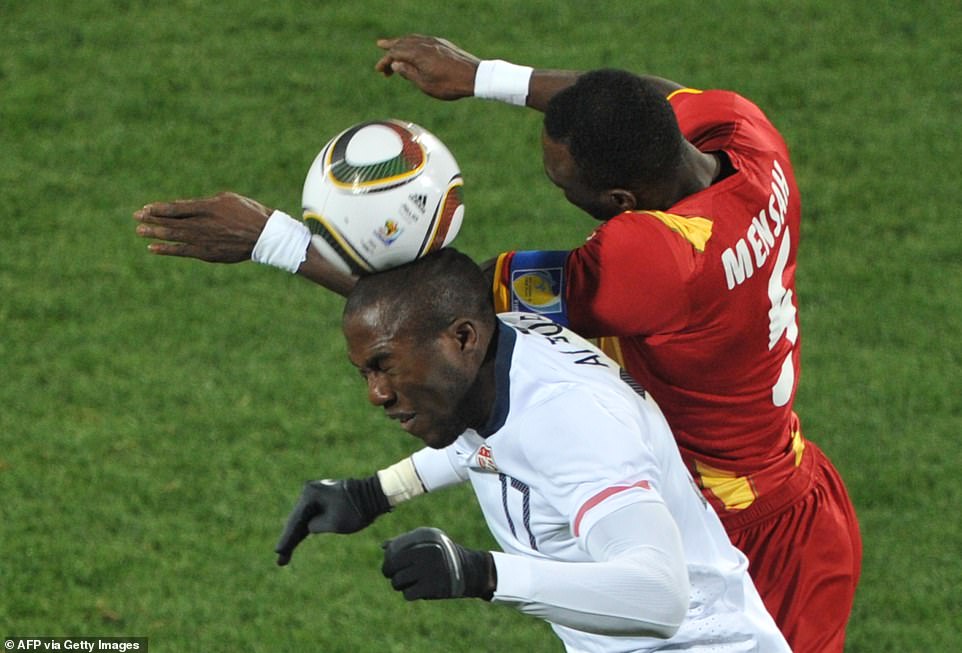 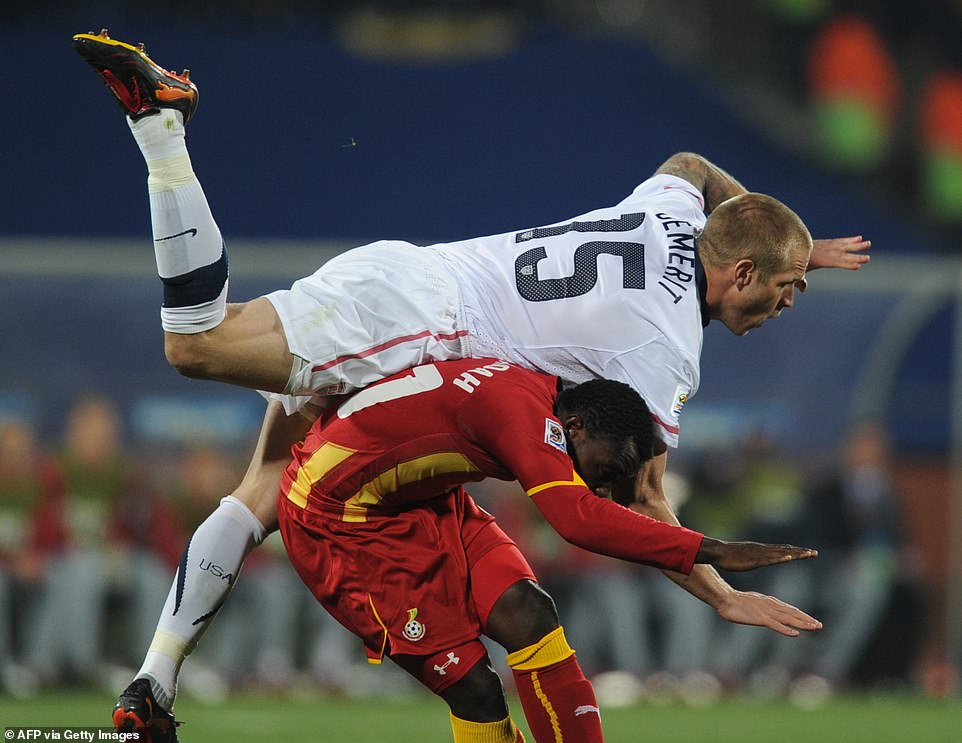 The good news for Team USA in Brazil is they finally did exact revenge on Ghana, beating them 2-1 in the group stage opener.

Following a draw with Portugal and a 1-0 loss to Germany, the Americans advanced to face Belgium in the round of 16.

Again, Team USA had reason for optimism after ranking 13th heading into the World Cup ahead of teams like the Netherlands, France, and rival Mexico.

In Sunderland striker Jozy Altidore, the US finally had a talented goal scorer up front; the team boasted two esteemed keepers in Everton’s Tim Howard and Aston Villa’s Brad Guzan; and best of all, the veteran core of Dempsey, Donovan, DaMarcus Beasley and Michael Bradley – Bob’s son – had played together extensively under new coach Jurgen Klinsmann.

But for all the encouraging signs, the Americans looked lifeless for 90 minutes against a talented Belgian squad that included Eden Hazard, Vincent Kompany, and Kevin De Bruyne, as well as budding striker Romelu Lukaku. 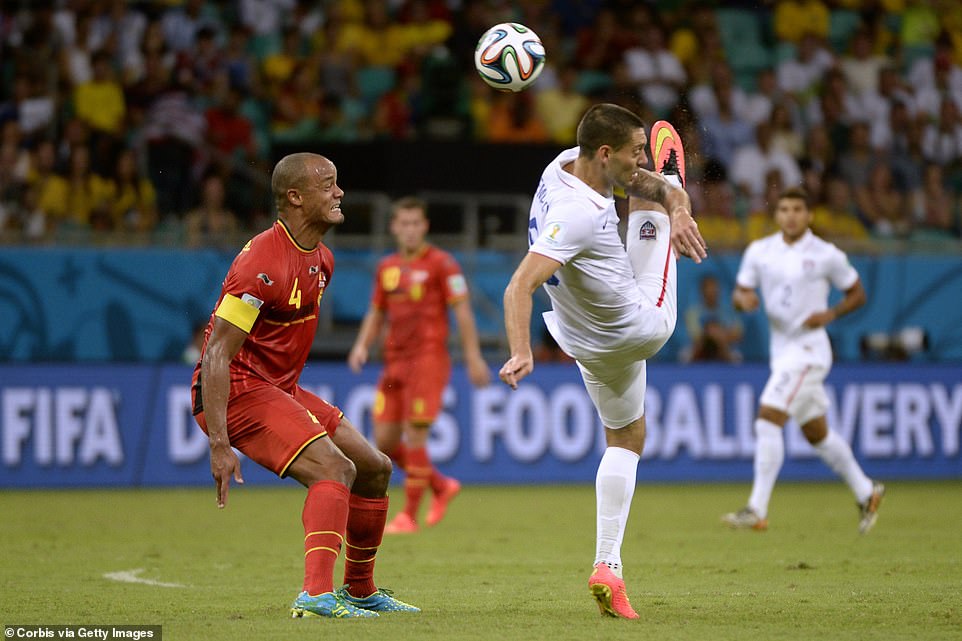 Luckily for the US, the team managed to keep the match scoreless for 90 minutes, but that good fortune would soon expire in extra time as De Bruyne and Lukaku would score in the 93rd and 105th minutes, respectively.

Julian Green would add America’s only goal in the 107th, but Belgium would hold on to face Argentina in the quarterfinals.

‘We were running on fumes,’ defender Matt Besler said.

The sad epilogue to the match is Team USA’s failure to qualify for the 2018 World Cup in Russia by virtue of a stunning defeat to Trinidad & Tobago in what was expected to be budding star Christian Pulisic’s breakout performance.

Instead Pulisic and company waited four years to get back to this point, and – like so many US teams before them – have a chance to change the narrative about American soccer.

The US face the Netherlands on Saturday at 10am. 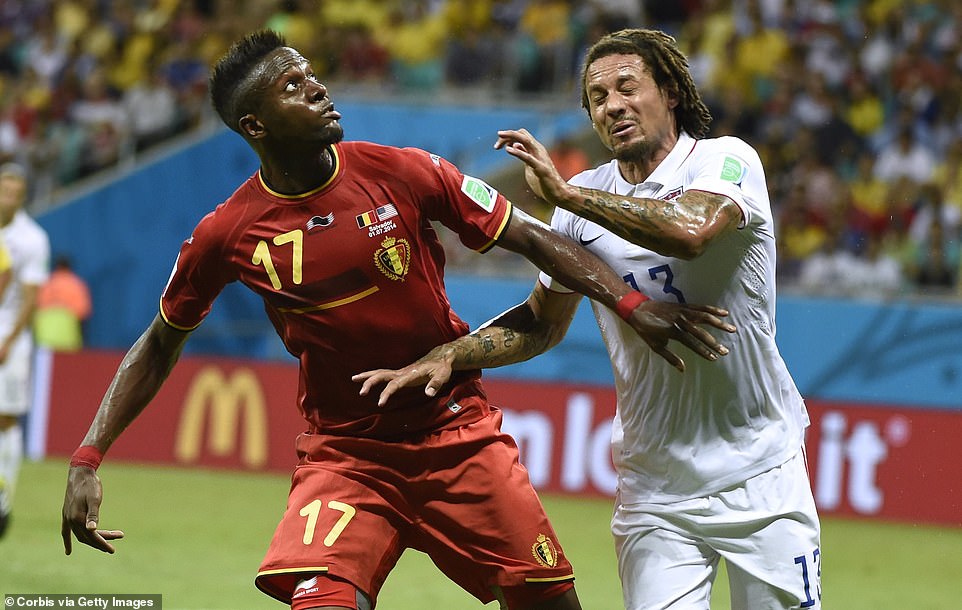