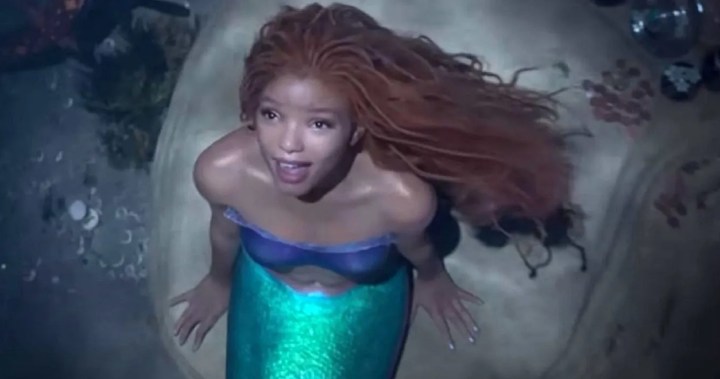 If there were any doubts that representation in popular media matters, the Disney live-action reimagining of The Little Mermaid is erasing them entirely.

The film’s first trailer was released Sept. 9 and featured a brief glimpse of Halle Bailey, 22, as the Disney princess Ariel. In the trailer, Bailey sings a snippet of Ariel’s iconic ballad, Part of Your World.

Young Black girls all over the world reacted with joy and excitement after seeing a live-action princess who looks like them, spurring a new social media trend where parents film their children reacting to the trailer.

In a clip shared to Twitter and TikTok, one young fan reacted in open-mouthed awe to the start of the trailer, exclaiming, “It looks so beautiful!”

When Bailey is revealed as Ariel in the trailer, the girl’s mother explained, “That’s the new Ariel.”

In disbelief, the little girl, visibly delighted, replied, “That is Ariel?”

“Are you sure?” the girl asked, pointing to the TV screen. “That’s the real her?”

The video even caught the attention of Bailey herself, who responded to the mother on Twitter, writing, “k i just sobbed watching this thanks she’s so sweet.”

k i just sobbed watching this thanks 😭💕she’s so sweet ❣️🥹 https://t.co/jKKdHkOvDe

On TikTok, parents were quick to jump on the bandwagon, also sharing the reactions of their children to the new trailer.

One three-year-old girl put her hand on her heart at the sight of the new Ariel and exclaimed, “I think she’s brown!”

With a wide smile on her face, the girl continued, “Brown Ariel is cute.”

Sitting directly in front of her TV, another young girl, Maya, shouted “Mommy!” as Ariel appeared on screen, and even did a double take to make sure what she was seeing was true.

Pointing, the girl was lost for words. “I know, right!?” Mom responded behind the camera.

Writhing with excitement on the floor, the girl said, “She’s brown like me. I’m so excited.”

“She’s a Black girl!” another young fan exclaimed upon seeing Bailey in the trailer. “They made Ariel into a Black girl,” she repeats, surprised.

Mouth open in shock, the girl sang along to the last note of Part of Your World.

One mother filmed three of her children, two young girls and a boy, reacting to the trailer.

“She’s Black!” one of the girls shouts before the siblings break out into excited chatter. “Finally! A Black mermaid!” the same girl smiled, doing a little dance in her seat.

The siblings applauded at the end of the trailer.

“Girls, come here. I want you to see something,” another mother said, inviting her two daughters to watch the trailer.

Unsure what they were watching, the older daughter — who is wrapped in a blanket — said she recognized the melody to Part of Your World.

“They made a Black Ariel!” she screamed while jumping up and down.

Watching on an iPad, a six year old girl twice declared, “She’s like me!” upon watching Bailey in the trailer.

Even older fans of The Little Mermaid had intense reactions to the new trailer. One woman, dressed in a red wig and Ariel-inspired cheerleading costume, watched the trailer on her phone.

“I’m shaking already,” she laughed as she pressed play.

“Why am I so emotional?” she asked, tears forming in her eyes. “I’m crying,” she said repeatedly, wiping away tears. “That’s so cute. I’m so excited.”

The new live-action film is a remake of the Disney animated classic The Little Mermaid from 1989. The story follows a young mermaid, Ariel, who makes a deal with an evil sea witch to grow legs and live on land in order to fall in love with a prince, all at the cost of her voice.

On Monday, Variety reported that the trailer has accumulated over 104 million views.

The film is expected to make its theatrical release in May 2023.