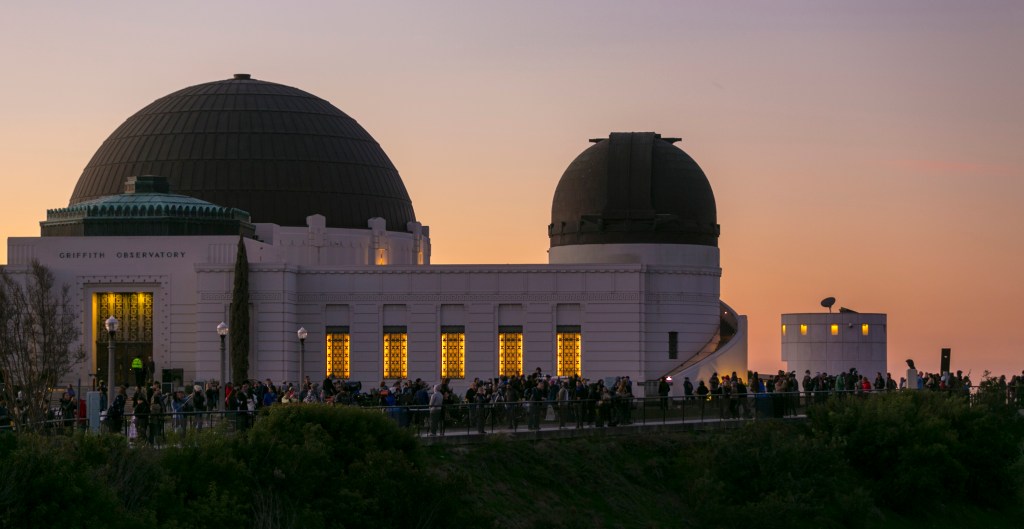 A brush fire scorched about six acres and forced an evacuation of the famed Griffith Park Observatory today, and a person of interest was detained.

The blaze was reported shortly before 3:30 p.m. along North Nottingham Avenue on a hill just south of the observatory in Griffith Park. Originally reported as a roughly 100-by-50-foot spot fire, the blaze quickly grew to about four acres, according to the Los Angeles Fire Department.

Smoke billowed up the hill, some of it wafting across the observatory’s famed domes, although the flames did not appear to reach the landmark or the nearby Greek Theater.

92 @LAFD firefighters are battling this #MajorEmergency #BrushFire, which has burned approximately 6 acres of medium brush. Nearly all active flame has been eliminated and forward progress stopped after one hour & 12 minutes. pic.twitter.com/XpLY0BTU4D

Because of the fire’s proximity to the observatory and the thickness of the brush, the fire department classified the blaze a “major emergency” and dispatched more than a dozen engines with air support.

In addition to evacuating the observatory, park rangers were also clearing hiking trails in Griffith Park.

The observatory was closed to the public on Tuesday, per its usual schedule, but all staff were cleared from the building.

The LAFD announced about 3:55 p.m. that crews managed to contain the blaze at about six acres. No injuries were reported during the blaze.

The cause of the fire was under investigation, but the Los Angeles Police Department confirmed officers detained a person of interest in connection with the fire. However, no further details were immediately available.

It’s the latest in a sting of fires of late that first responders have faced. Another today, called the Lauren Canyon Fire caused some confusion. It was not, in fact, located in the canyon that stretches between the Valley and the Sunset Strip, but in an arroyo of the same name in Sylmar.

According to the Los Angeles Fire Department, the fire on 12300 North Laurel Canyon Boulevard was at about one acre at 6:05 p.m. There is also a light wind but no structures are threatened. https://t.co/YX80pHZYb4

There was also, of course, the fire in Laguna Niguel last week that destroyed at least 20 multimillion dollar homes. That blaze was finally declared 100% detained today.