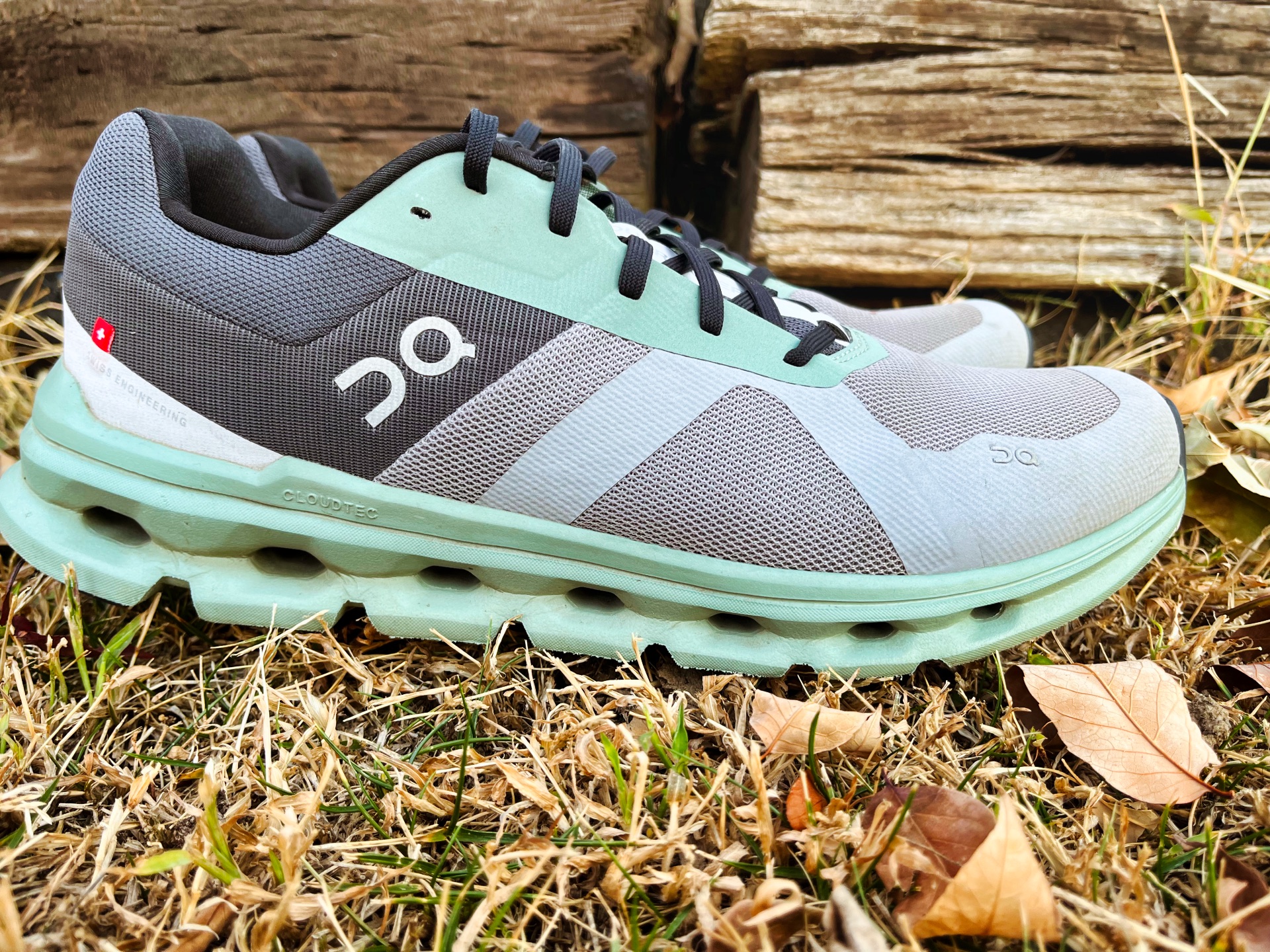 In 2018, I reviewed the ON Cloudflyer, a lightweight responsive stability shoe from a relatively under-the-radar brand from Switzerland.

I ended up falling in love with them. They were unlike anything I had run in before.

Fast forward 4 years and the secret is out. I can hardly go anywhere without seeing a pair of ONs on someone’s feet. Now I believe they are known as an athleisure brand first but am starting to see them on more runner’s feet at the races I work.

ON running has been branching out some this year with new offerings. One of those offerings is the Cloudrunner. A traditional trainer with ON’s nontraditional foundations. ON describes the Cloudrunner as “A cushioned, supportive running shoe with a unique comfort sensation.” It is part of their stability lineup alongside the Cloudestratus and Cloudflyer. The Cloudrunner would sit in the middle of these two. It has moderate cushioning and stability.

The Cloudrunner retails for 140 dollars placing them in the middle of a crowded stability field. It competes with the Brooks Adrenaline, Hoka Arahi, Saucony Guide and ASICS GT 2000. The Saucony Guide has a ride similar to the Cloudrunner.

I was looking forward to getting them when I found out I was assigned to review them. When I opened the box for the first time I was surprised by what I saw. It was an ON trainer but it was different. The cloudpods were still there but with more cushioning around them. The visual style of ON’s set them apart from other brands.

They use mixtures of unique colors unlike other brands out there. Alloy/moss was the colorway I got. It was a subtle mix of shades of gray along with a lighter green. It wasn’t going to stand out in a crowd but it is unique.

Bounce and more bounce initially hit me when I slipped them on out of the box. A plushness translated into instant comfort. Along with the cushioning, there was also a cradling in the midsole. This added to the comfort of the trainer. This got me excited to take them out on the road. The maiden voyage of the Cloudrunner was a 5-mile hilly route. It was a comfortable and smooth ride from the first step.

Engineered mesh is what is used for the upper of the On Cloudrunner. It is a double layer of mesh that is durable. The mesh showed minimal wear and tear after 100 miles in. This is an upgrade from the other On trainers I have reviewed.

Comfort continues in the upper. The double mesh provided ample cushioning from heel to toe. There was a medium amount of cushioning in the heel. It has a standard heel counter similar to those used in other trainers. It held my foot in place for the most part aiding in the stability of the trainer.

While the upper is durable it lacks breathability slightly. This is due to the second layer of the mesh and its thickness. Other than that the upper is a strength of the Cloudrunner.

Let’s start from the ground up. The outsole of the ON Cloudrunner is covered in CloudTec Rubber. With thicker coverage in the forefoot and heel to handle impact and lift offs. This is a wise choice because it shows some wear after 60 miles. The tread is on the lighter side so it struggles a bit in wet conditions.

Zero gravity foam is a lightweight compound used for the midsole. It is a plush compound offering a comfortable ride from the first step. Between the foam and the cloudpods the Cloudrunner offers a bouncy ride. The mix of these two offer a more traditional feel than the previous ONs I have run in.

The cloudpods are enveloped by the zero gravity foam instead of being individual which gives it this feeling. The downside to all this comfort and plushiness is the lack of an energy return.

The midsole is constructed to form a foot cradle for your feet. As you wear the Cloudrunner the cradle does what its name suggests, it cradles your feet adding to the comfort of the trainer. On the medial side you will also find cloudtec “guiderail” running from the heel to mid foot area. They work together to provide stability. It is mid to moderate amount of stability. The 9mm drop along with the wider base also aids in this.

In the middle of the midsole you will find a speedboard. This is a piece of hard plastic placed in the heel that extends to the midfoot. Basically, it adds structure to the midfoot along which helps propel you forward. The results were minimal. If it had more effective responsiveness it would be more prevalent encouraging more energy return on toe offs.

What do you get when you take your unique approach and add in traditional elements to a daily trainer? You get ON’s Cloudrunner. A new stability trainer that produces mixed results.

Let’s start with the strengths. The Cloudrunner ride is a bouncy and plush one. Take a normal ON offering and double the bounce and that is what the ride of the Cloudrunner feels like. This provides comfort in every step while in them. They are also stable due to the combination of the new zero gravity foam and wider base than other ON offerings. Another strength is durability, which is found in both the midsole and upper. They are built to last for hundreds of miles.

One of the drawbacks is due to the amount of bounce and plushness it felt like the Cloudruner lacked energy return on toe off. This can sometimes make it feel like you are working harder on your run. Its lack of responsiveness holds them back from being a true daily trainer ready to handle any type of workout you throw at them. It also lacks breathability because of the second layer of the engineered mesh.

I can respect what ON is trying to accomplish with the Cloudrunner. They have released a “gateway” trainer for runners who aren’t willing to dive into the ON pool. A running shoe that looks and feels like most of the trainers out there.

Don’t get me wrong, it is a comfortable traditional trainer built for miles whether you are walking or running. Unfortunately, the drawbacks of the Cloudrunner hold me back from using them as a daily trainer.