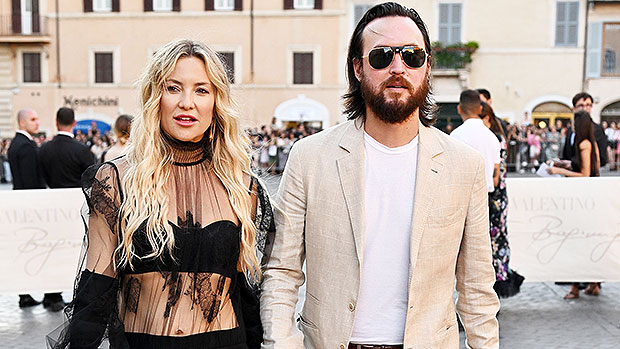 Kate Hudson is enjoying the winter weather with her fiancé and father to her youngest child, Danny Fujikawa! The 43-year-old actress is currently enjoying an Aspen getaway with her man and shared a glimpse of their time via a slideshow she posted on Instagram on Wednesday, Dec. 28. In the second photo of the below post, Kate and Danny, 36, were all bundled up in winter gear and sunglasses as they strolled through the great outdoors, which was covered in a blanket of snow.

The first photo showed Kate smiling as she leaned against a buffet in the kitchen of their rental home with a mug in her hand. She wore a blue sweater, a printed floor-length skirt, and brown snow boots with red laces. Her signature blonde locks cascaded down her chest and nearly reached her belly button. She kept warm with the same fur hat she donned in the first photo. “G’mornin,” she captioned the post, alongside two snowflake emojis and a coffee emoji.

Kate’s winter trip follows a busy month for her. In November, the highly anticipated sequel to Knives Out, Glass Onion: A Knives Out Mystery, debuted and became Netflix’s sixth-largest film debut, according to The Hollywood Reporter. Furthermore, it hit big in theaters, earning between $12.7 million and $13 million in its five-day limited release in just 700 North American movie theaters, per the outlet.

At the beginning of December, she got down and dirty in an episode of HGTV’s Celebrity IOU with the Property Brothers, Jonathan and Drew Scott. In the episode, she gifted Danny’s mother, Melissa Linehan, a backyard makeover. During one of her several press stops, she told Jimmy Fallon on The Late Show Starring Jimmy Fallon that she’s working on her debut album. “I’ve been making a record for like a year,” she hesitantly revealed.

And of course, the Something Borrowed star celebrated the Christmas season with Danny and her three kids. Kate shares her first child, son Ryder, 18, with her ex-husband Chris Robinson and her son, Bingham, 11, with her former fiancé Matt Bellamy. Kate gave birth to her first daughter and first child with Danny, Rani, in 2018. She posted several sweet snapshots of her kids celebrating Christmas on Dec. 25, with the top photo showing Ryder with his arms wrapped around his two young siblings as they cuddled in matching pajamas. “Merry Christmas all of you beautiful people out there!” she captioned the post. “Sending you crazy joy from our nutty family to yours.”

Earlier in the month, the Golden Globe winner admitted that she isn’t sure if she’s done having kids. “I’ve“I’ve been having children my entire adult life,” she told Byrdie magazine for its “After Dark” issue. “I’ve got my four-year-old and I’ve got a kid in college. And I don’t even know if I’m done yet. You know, I don’t have the answer yet.”