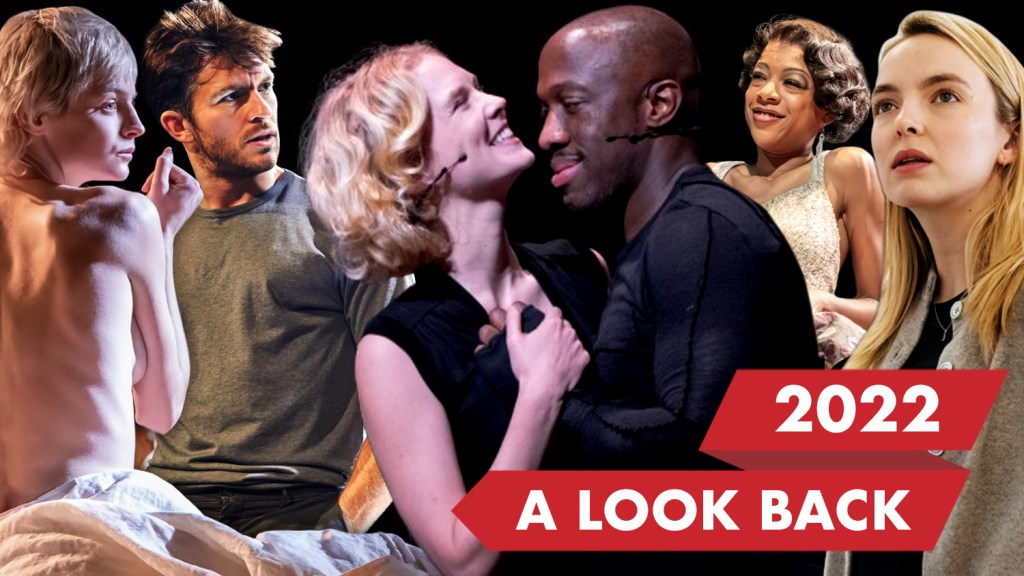 So, here’s the good news. Martha Plimpton has packed up her home in New York to live and work in London. Pooches to follow.

Her first gig? Playing Jacque in Shakespeare’s As You Like It on the stage of @sohoplace, the West End’s first purpose-built theatre in half a century. That Plimpton should deliver, with aplomb, the ‘All the world’s a stage’ monologue in Josie Rourke’s lively festive production, seems wholly appropriate because the same viewpoint applies elsewhere in town.

Emma Corrin is outstanding in Orlando, director Michael Grandage’s progressive commentary on gender and sexuality, based on Neil Bartlett’s adaptation of Virginia Woolf’s novel. Forget The Rockettes, at one point there’s a chorus line of nine Virginia Woolfs.

One name links two of those shows: Nica Burns OBE, the chief executive and co-proprietor of Nimax Theatres. Nimax controls the Garrick where Orlando’s running, and Burns is the force behind new theatre @sohoplace and the producer of As You Like It currently occupying its stage.

But for all the five-star talent on stage and off, the bad news is that there’s despair behind the scenes.

The pubic facade is that everything’s just tickety-boo, but privately it’s the antithesis of that. Two West End producers, in the space of a week, tell me they’re looking to exit stage right out of the business. “We’re being killed out there but the show still has to f*****g well go on,” one disillusioned producer tells me.

It’s tougher Off West End where the Donmar Warehouse in Covent Garden, the Gate in Camden (formerly located in Notting Hill), Hampstead Theatre in North London and the English National Opera based in the West End have been stripped of their Arts Council England grants. This money has been shifted to the regions – good for the regions but it’s particularly devastating for new playwriting, most of which emerges from London theater’s dependent on Arts Council cash.

As Michael Billington, the Guardian’s former drama critic, observed, the cuts harm the “complex ecology of British theatre, everything is interconnected.”

The smaller Off West End theatres like the Bush in west London and north-west  London’s Kiln, for instance, are the venues that push new work.

The Bush enjoyed stellar success with Tyrell Williams’s terrific play Red Pitch, superbly directed by Daniel Bailey, which has scored practically every new writing trophy this year. That’s the power of theatres like the Bush. Cut their funding and you cut off the creation of new work.

Thank heaven’s actors and creatives like to live dangerously – they take enormous risks, and the results can often be electrifying. In that spirit, let’s look back at the best of London theatre in 2022. These lists are in alphabetical order:

JONATHAN BAILEY (Bridgerton) in Cock, a revival of Doctor Foster: A Woman Scorned writer Mike Bartlett’s provocatively titled 2009 play about sexual identity and gender labelling, but really it was a study of one man’s sexuality. That man, his name was John, was played by Bailey. He took such command of the stage that fellow star Taron Egerton barely got a look in. That wasn’t Bailey’s fault. Egerton looked uncomfortable when I saw the production directed by Tony-award winner Marianne Elliott (Company, War Horse), and produced with longtime partner Chris Harper through their Elliott & Harper Productions set up. Egerton later withdrew citing a cancer diagnosis in his family.

JODIE COMER (The Last Duel) in Prima Facie, by Suzie Miller, was a tour de force in any language. The twist in this comes when Comer’s skilful courtroom defender of rapists is herself cruelly violated by a male colleague. Refreshing to see a woman on stage attempt to prise away the patriarchal grip on ancient laws that have put female victims on trial instead of their attackers. Comer’s a must-see when the play transfers to Broadway in April this spring. Justin Martin directed. James Bierman’s Empire Street Productions produced and general managed the play at the Garrick Theatre.

EMMA CORRIN (Lady Chatterley’s Lover, The Crown) in Orlando. This sublime adaptation of Virginia Woolf’s 1928 novel marks the second collaboration between Corrin with director Michael Grandage, their first being the film My Policeman which also starred Harry Styles. Corrin brings immense wit and charm to their explorations of social, gender and sexual identity. A shoutout too, to fellow star Deborah Findlay (Cranford, The Split), who’s regal and wise in a variety of roles. Grandage’s Michael Grandage Company produced with Sand & Snow.

GILES TERERA  (Death of England: Face to Face) in director Clint Dyer’s blistering, brutal production of Shakespeare’s Othello on now at the National Theatre. Terera’s a forceful Othello but shows us his vulnerabilities which adds unexpected poignancy to his moments with Rosy McEwen’s Desdemona. A National Theatre production.

SAMIRA WILEY (A Handmaid’s Tale) in director Lynette Linton’s acclaimed revival of Pearl Cleage’s Harlem renaissance drama Blues for an Alabama Sky that played at the National Theatre back in the Autumn. Wiley as Angel a wispy showgirl with a bluesy voice powerful enough to raise the NT’s roof. The ensemble was full of stand-out players, including Giles Terera who did most of his scenes with Wiley. Terera rehearsed for Othello during his run in Blues for an Alabama Sky. A National Theatre production.

Best example of why live ABBA is better than ABBA avatars:

Abba Voyage at the ABBA Arena in Stratford, East London, is a special effects marvel featuring the motion-captured avatars of ABBA stars Agnetha Faltskog, Bjorn Ulvaeus, Benny Anderson and Anni-Frid Reuss. All very entertaining but it doesn’t beat the live actors performing ABBA hits in the musical Mamma Mia! now in its 24th year in the West End. I was there when the naysayers told producer Judy Craymer that Mamma Mia! wouldn’t see its first Christmas. What’s that song I hear Craymer hum? The Winner Takes It All.