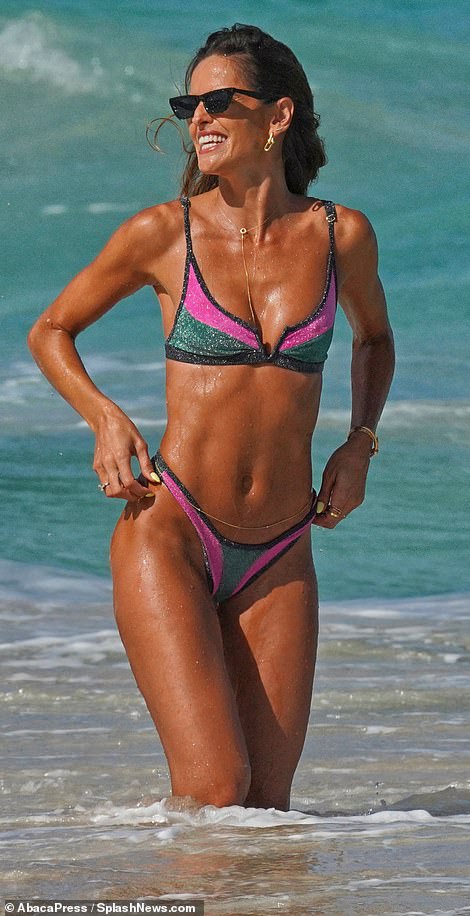 Izabel Goulart has been having the time of her life while working on her suntan as she enjoys the white sand beaches of St Barts this week.

On Wednesday the 38-year-old striking beauty was seen splashing around in the ocean as she wore a cheeky and colorful bikini that barely contained her assets.

Also with the 5ft10in wonder – born Maria Izabel Goulart Dourado in Brazil in 1984 – was her 32-year-old fiancé Kevin Trapp, a professional soccer player from Germany. 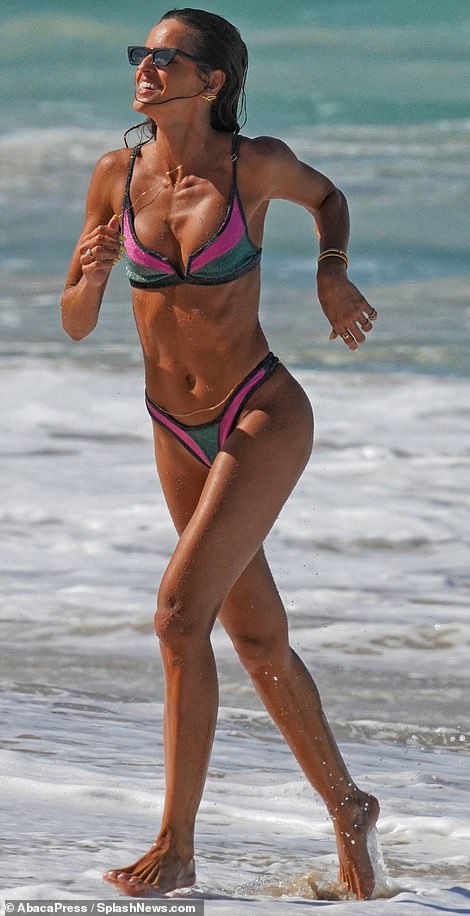 Sensational in the sun: Izabel Goulart has been having the time of her life while working on her suntan as she enjoys the white sand beaches of St Barts this week. She seems to be in the best shape of her life as her body is sculpted 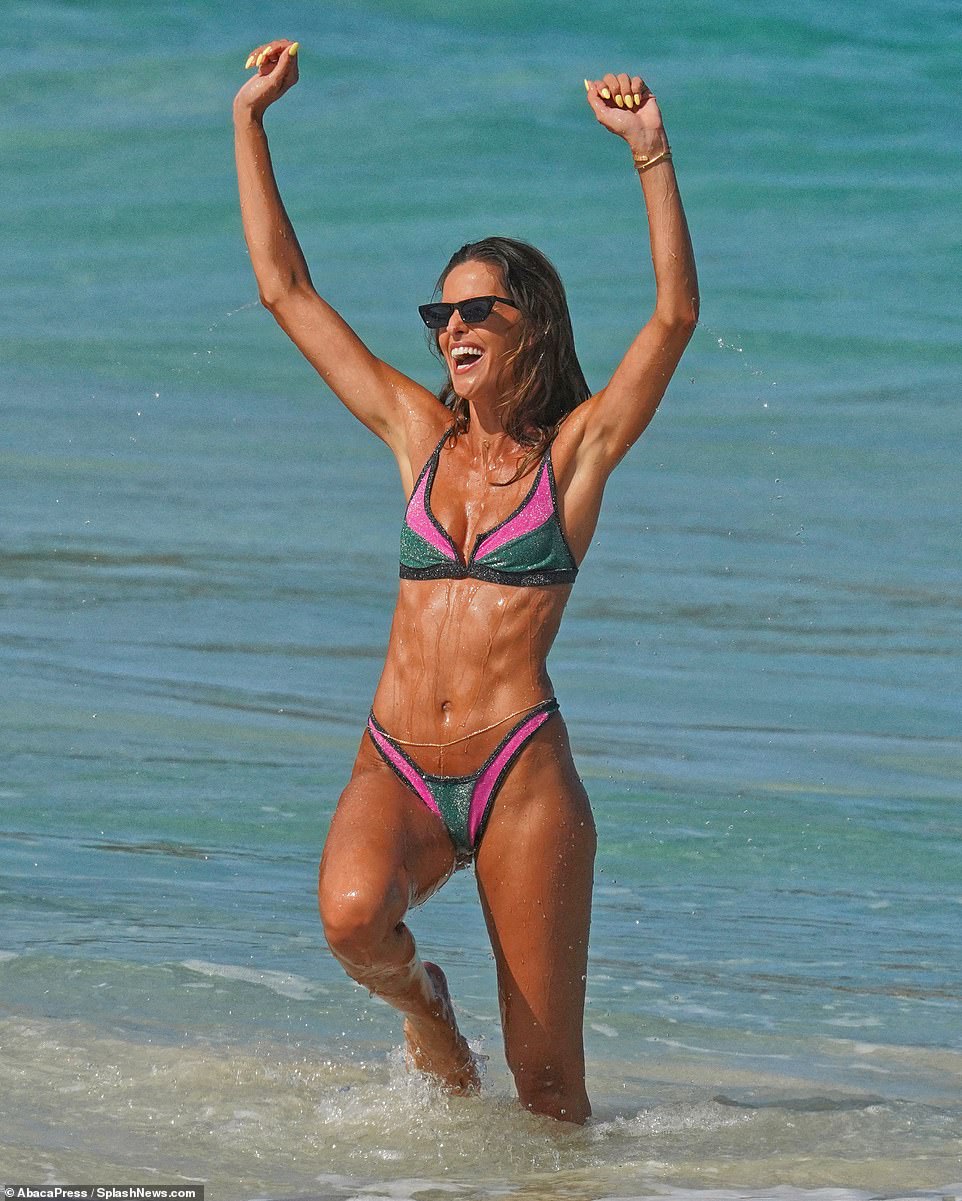 A wonder of the world: On Wednesday the 38-year-old striking beauty was seen splashing around in the ocean as she wore a cheeky and colorful bikini that barely contained her assets

They were seen smiling and laughing as they played a game of ping pong with a small cobalt blue ball on the beach.

She also flashed her diamond engagement ring from Kevin as she put an around around him. Her nails were painted an Easter yellow color.

The supermodel – known for her various Sports Illustrated Swimsuit Issues – donned a tiny bikini as she soaked in the sun.

Izabel also looked angelic as she walked into the crystal clear ocean water alone with her long wavy hurl flowing over her bare back. 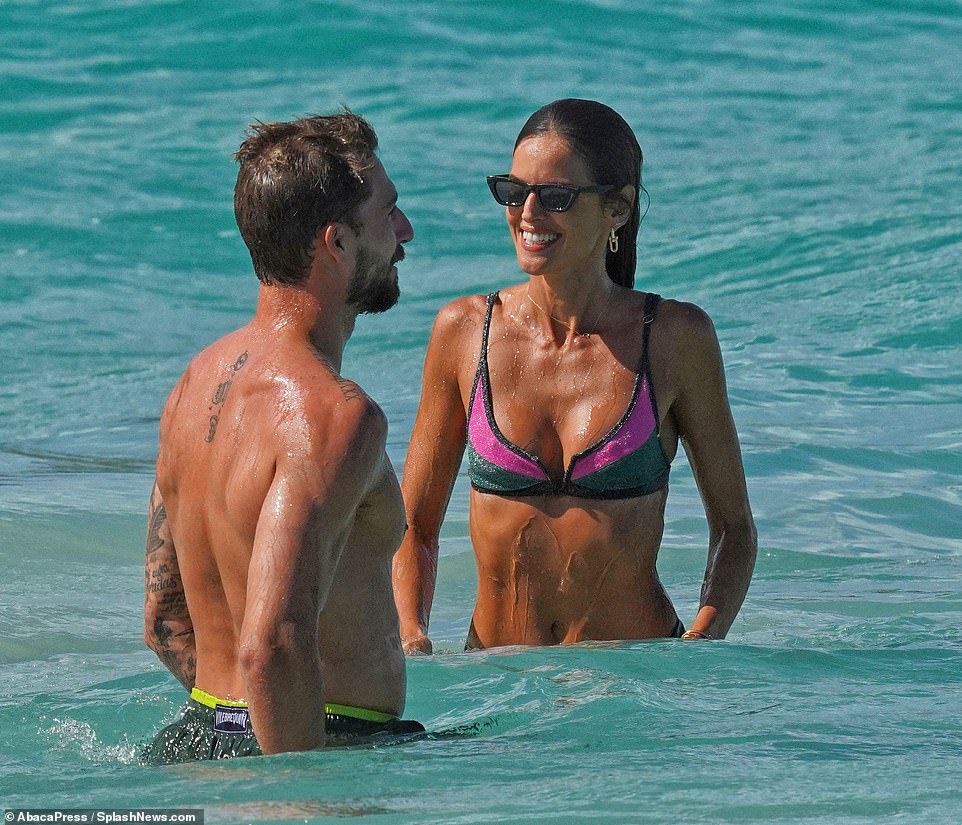 Love in the Caribbean: Also with the 5ft10in wonder – born Maria Izabel Goulart Dourado in Brazil in 1984 – was her 32-year-old fiancé Kevin Trapp, a professional soccer player from Germany 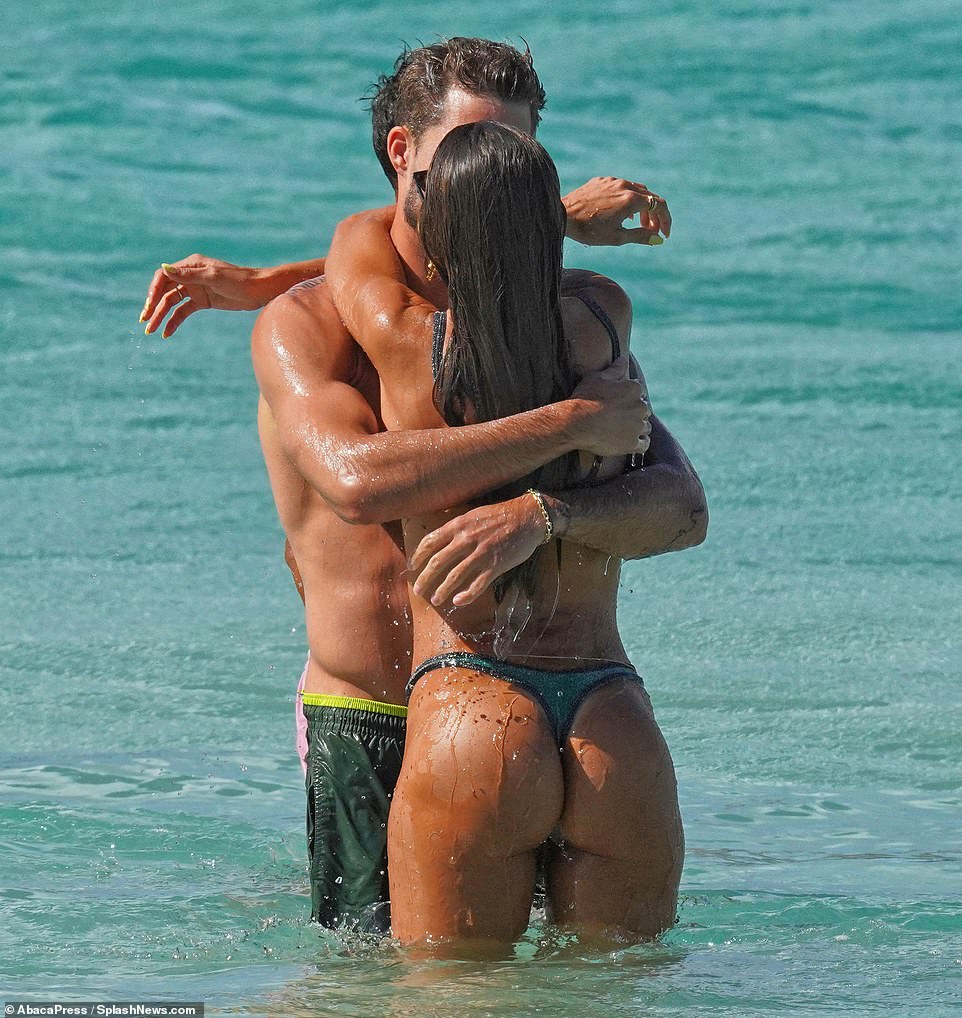 Smooches in the sea: At one point he wrapped his arms around his lady love and planted a kiss on her 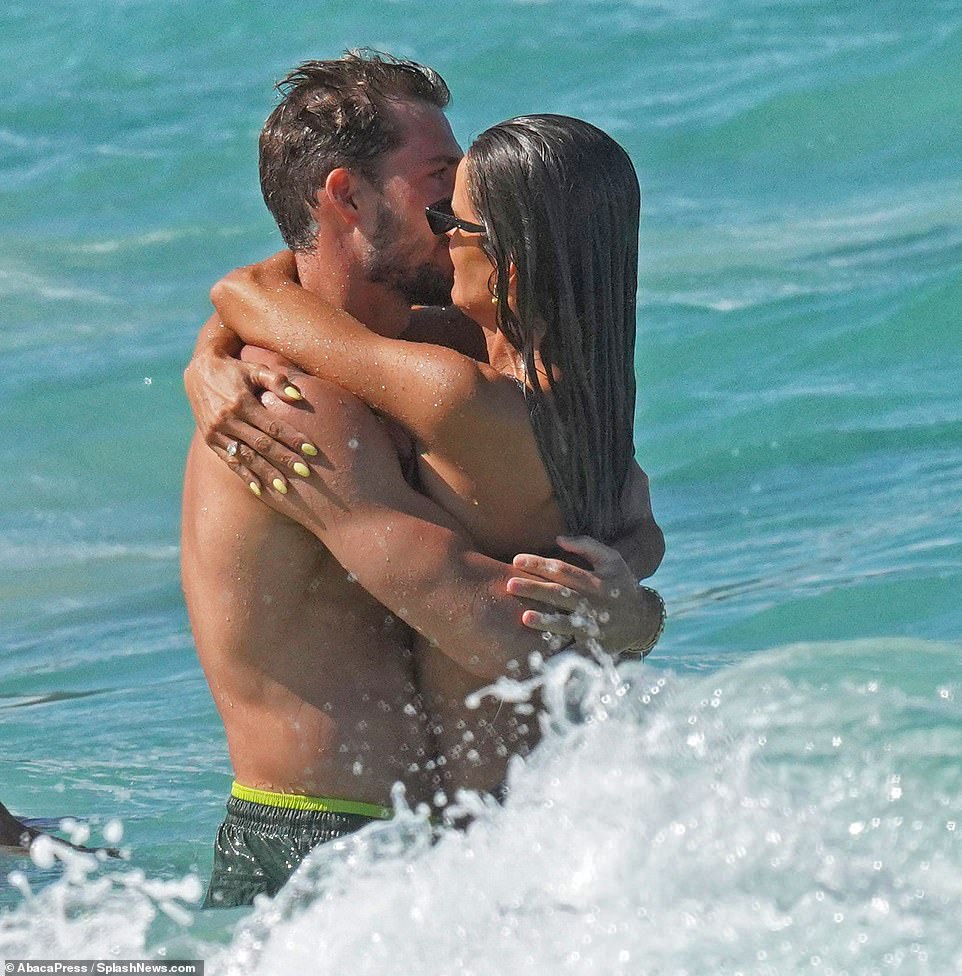 A little bling in the water: In this image she flashed her diamond engagement ring from Kevin as she put an around around him. Her nails were painted an Easter yellow color 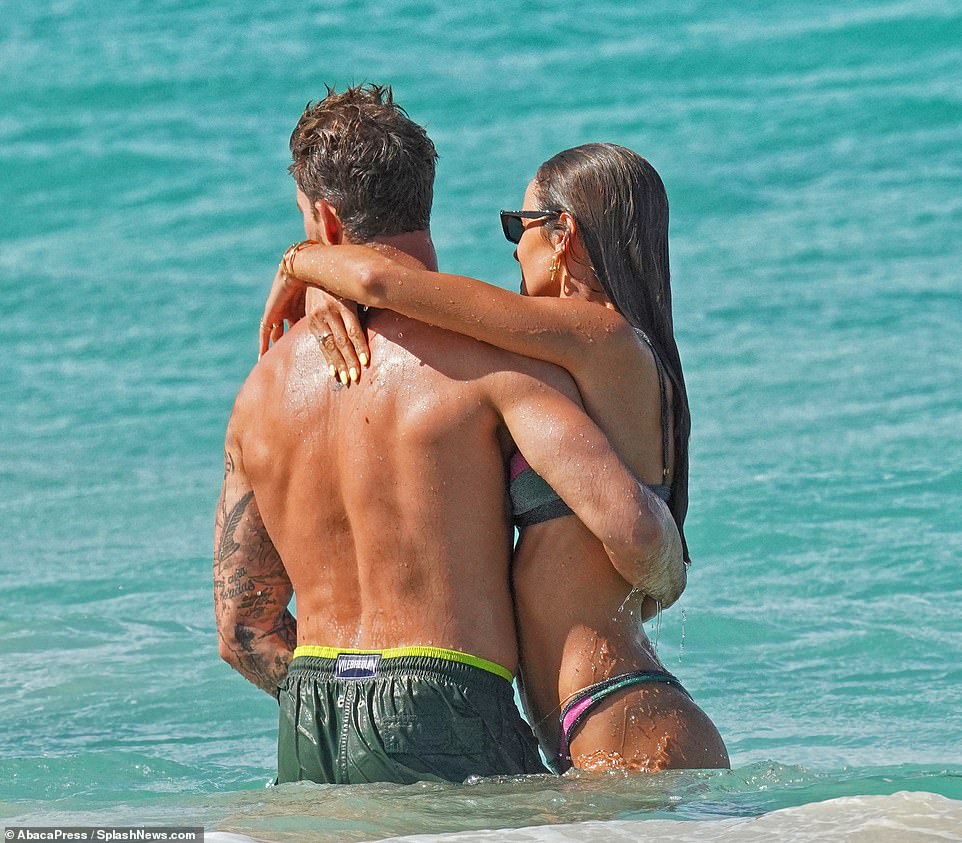 Lean on me: She could not keep her hands off her beau as he displayed his array of tattoos on his toned body 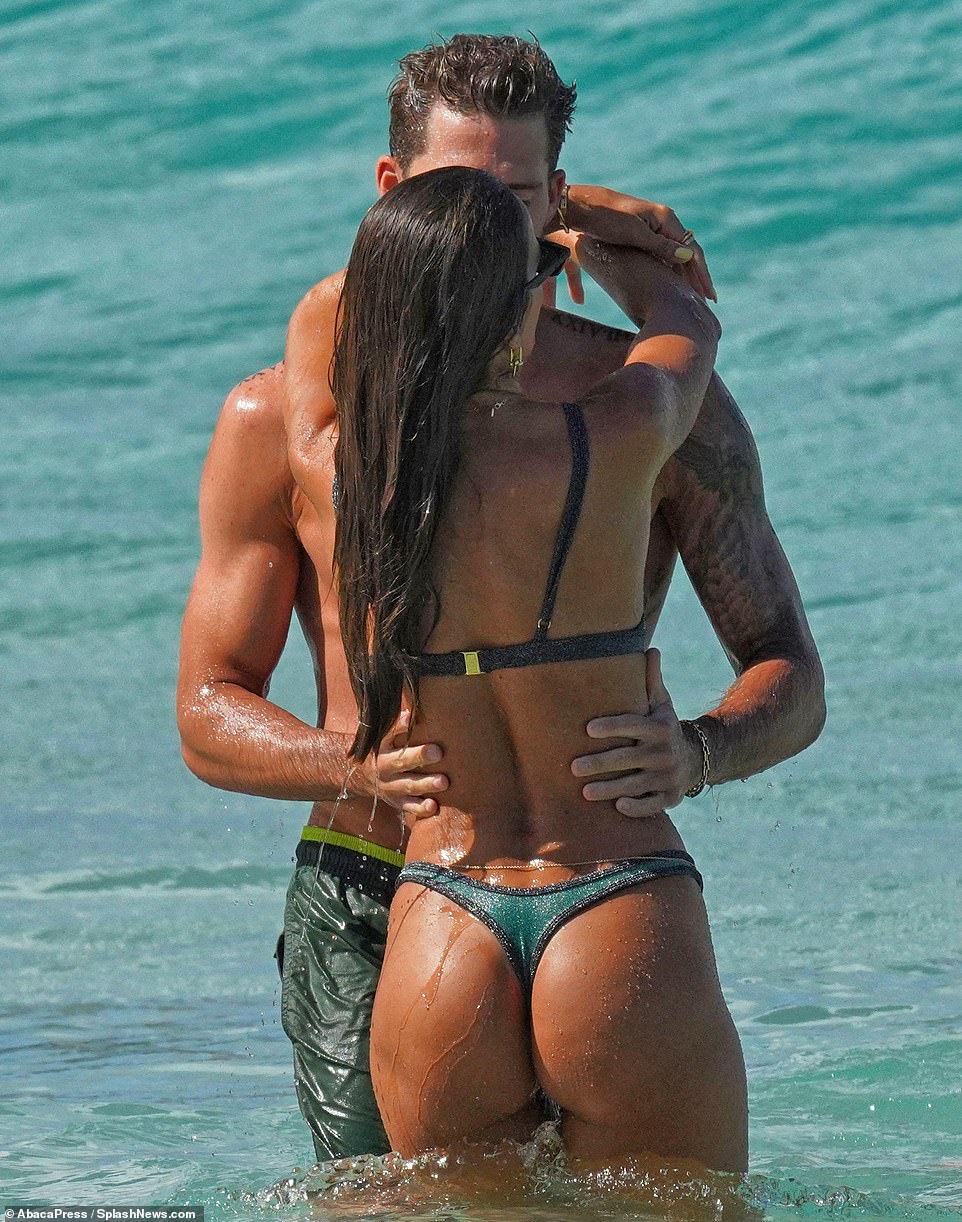 He wears gold as well! The German athlete had a gold link bracelet on his wrist as he put his hands on Izabel’s waist 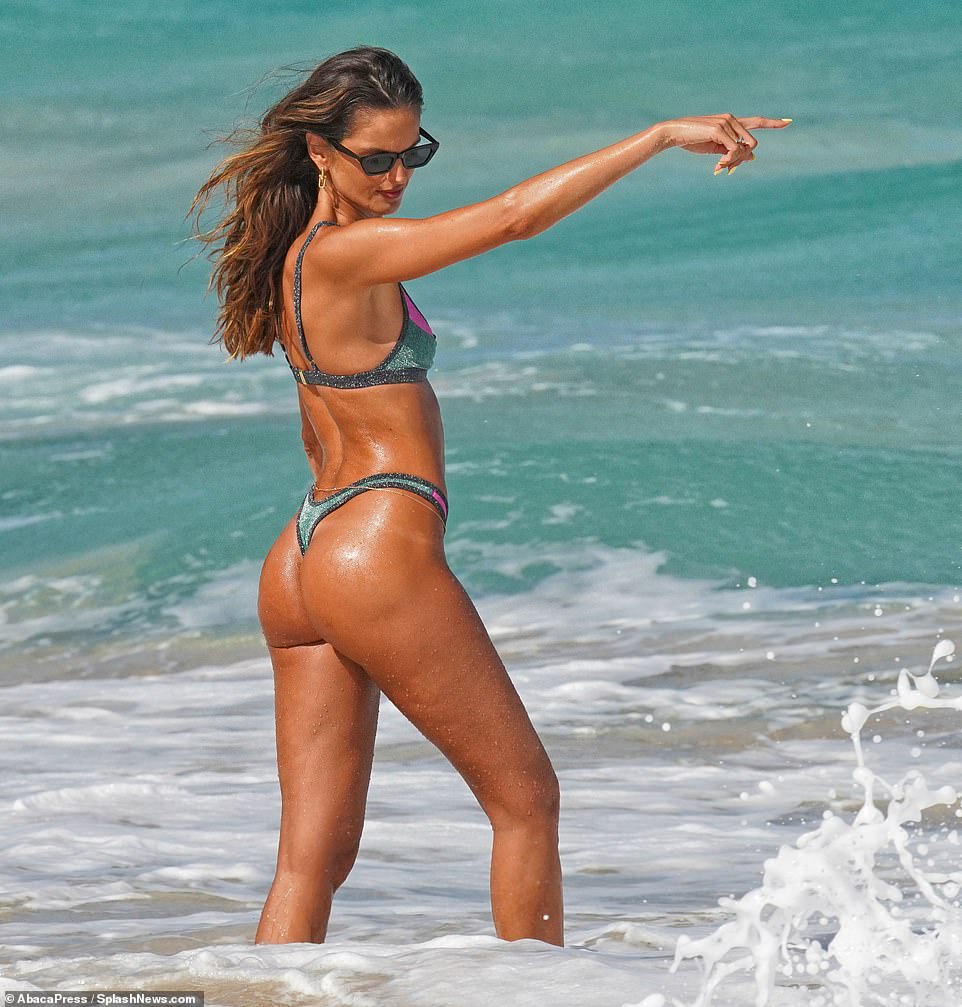 Good point: When she was only a teen, a scout told her that she should get into the modeling business

The former Victoria’s Secret Angel rocked an eye-catching multi-colored bikini that had an unusual design.

The sizzling two-piece consisted of a classic triangle top and cheeky thong-style bottoms but there was a chic black piping on the edges that made it stand out.

And the siren added a yellow gold necklace as well as a thin yellow gold chain around her trim and toned waistline.

One of the waves crashed into Izabel, causing her to let out surprised laughter. She seemed to be enjoying the cool water. 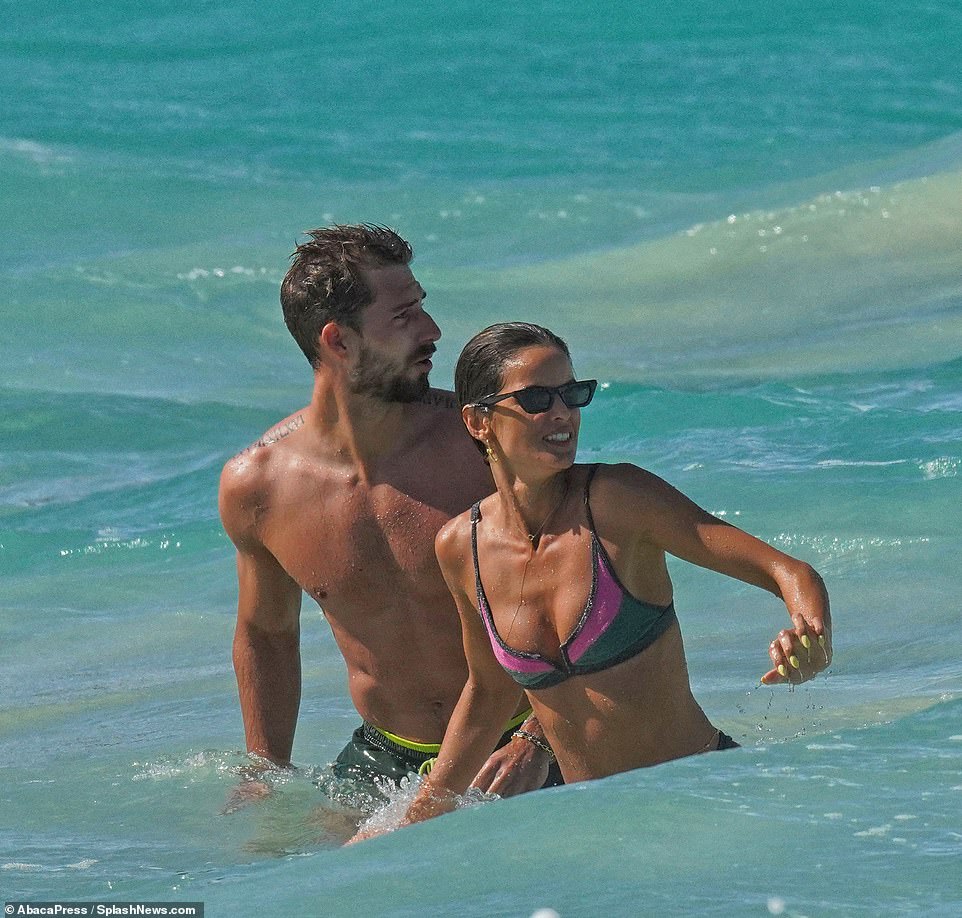 Watch out for that wave: The lovebirds both looked back as they tried to ride a wave into the shore 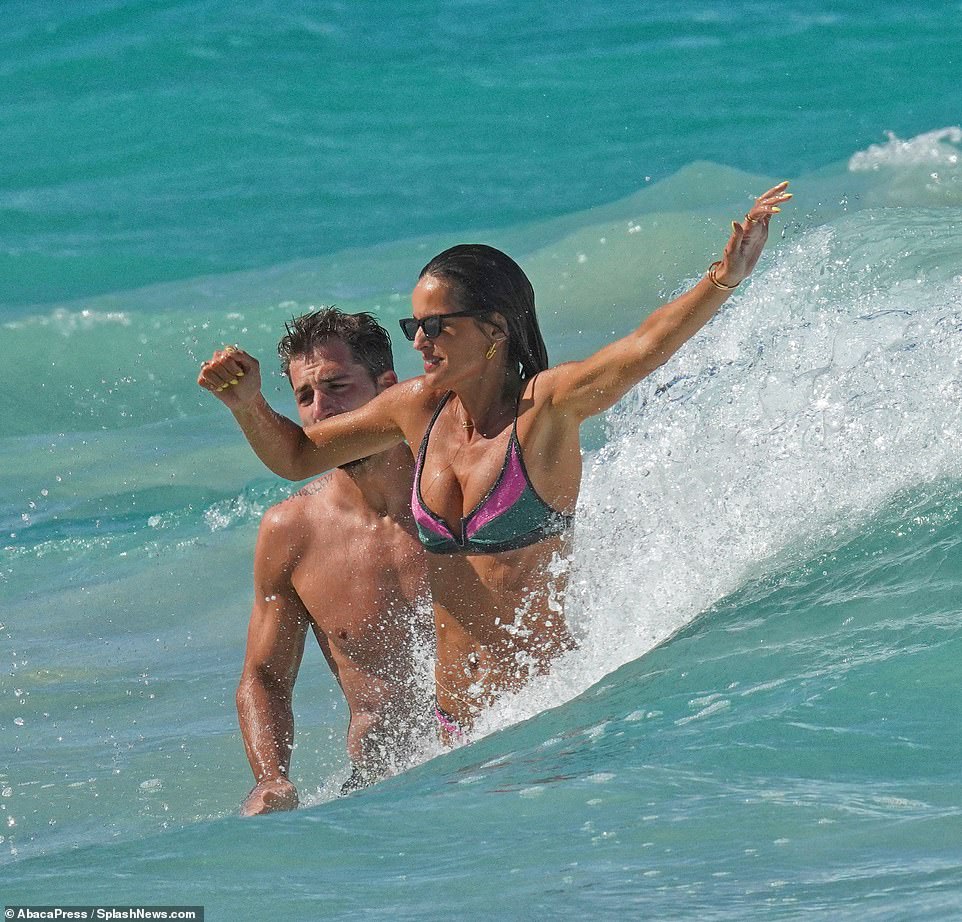 The wave got them: Here they are seen both being hit by the waves as they braced themselves

She flashed a beaming smile while a pair of large black sunglasses rested on the bridge of her nose.

The Brazilian beauty whipped her damp brunette hair as she turned to laugh in the direction of the camera.

Not missing a beat, she refocused herself and continued her charge into the water.

‘When in my Element, I’m my happiest!!!’ the catwalk queen captioned the post, followed by a yellow heart and a palm tree emoji.

Izabel has been documenting her and Kevin’s idyllic holiday on her Instagram since arriving in the tropical destination last week. 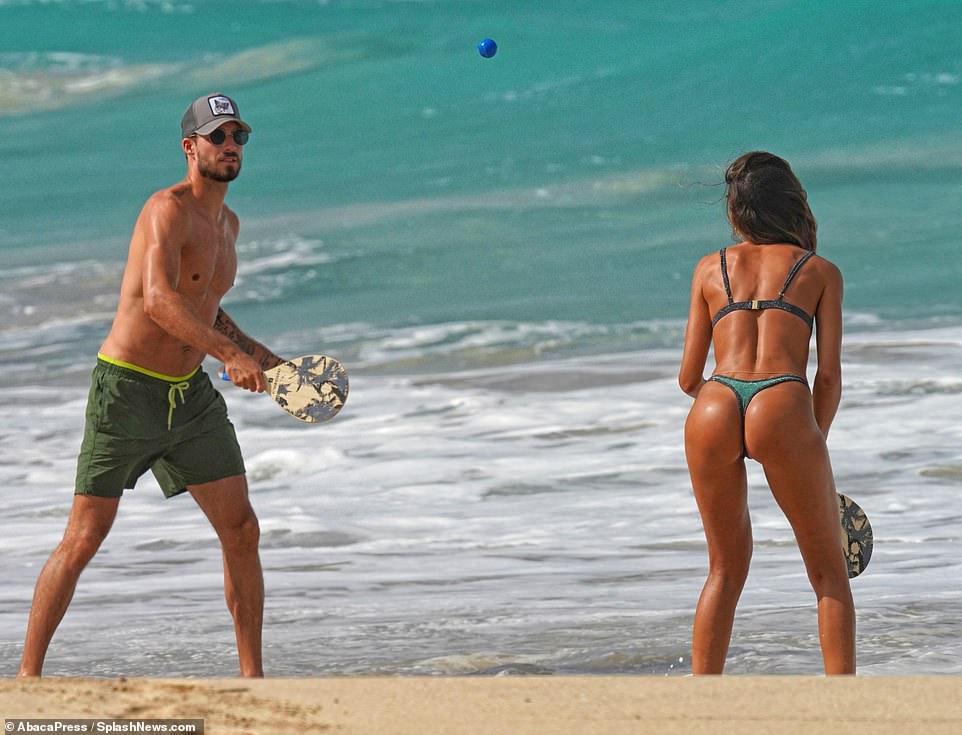 Her future husband: She had fun in the sun with her man, who she started seeing four years ago 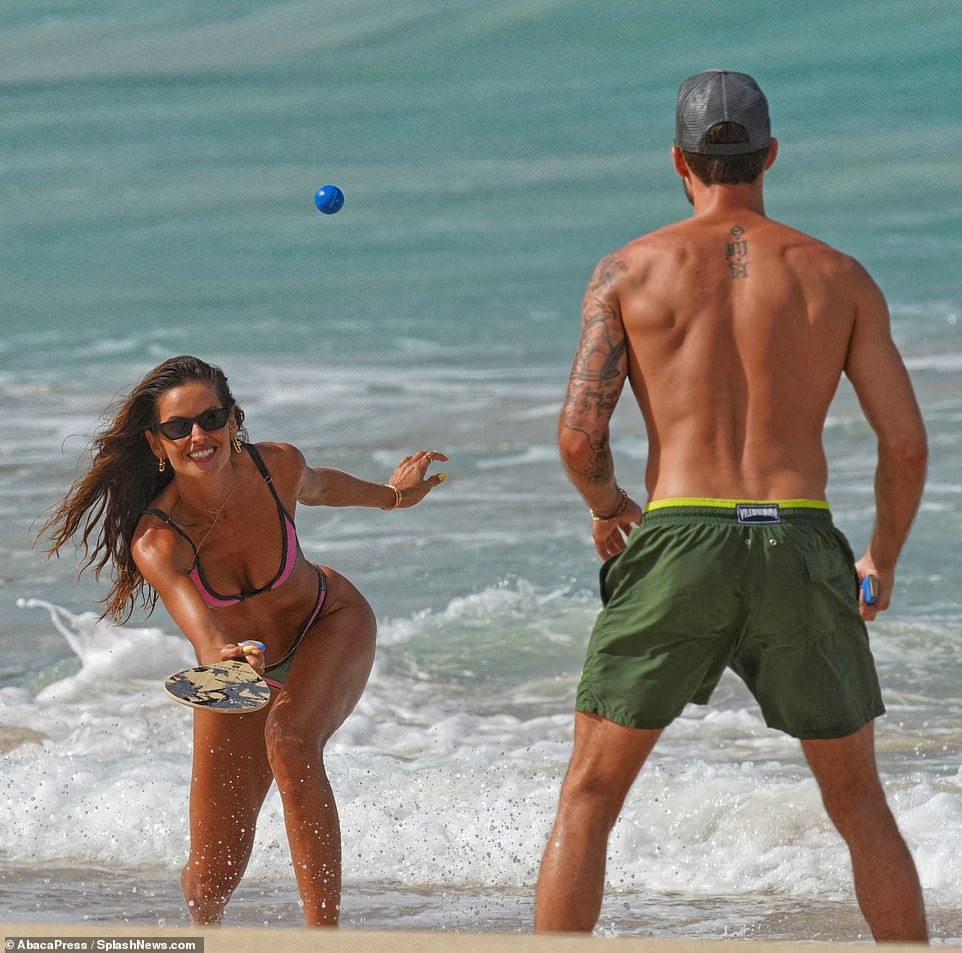 Having a ball! They were seen smiling and laughing as they played a game of ping pong on the beach 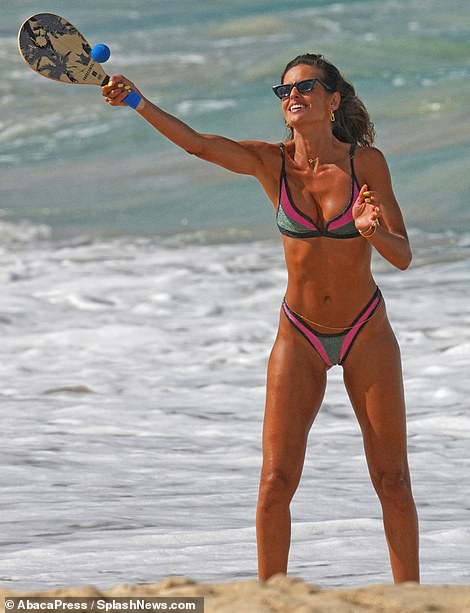 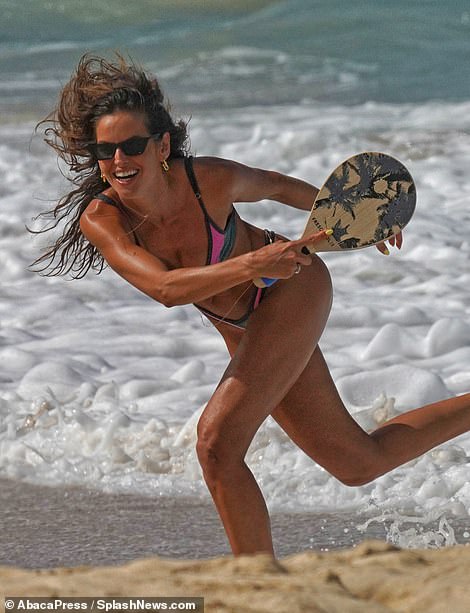 Giggles during the game: The cover girl really went for each volley as she seemed to have fun with the game. She even lunged forward, almost falling face first in the sand

On Christmas day, she uploaded a clip of herself rocking a very tiny red thong bikini as she and Kevin donned matching Santa Claus hats.

The duo put on an athletic display as they hung out on the sand.

Izabel appeared to be doing push ups as she grabbed her beau’s hands as Kevin lay on the sand, holding herself in a plank while sharing a long kiss

The two have been engaged four more than four years. 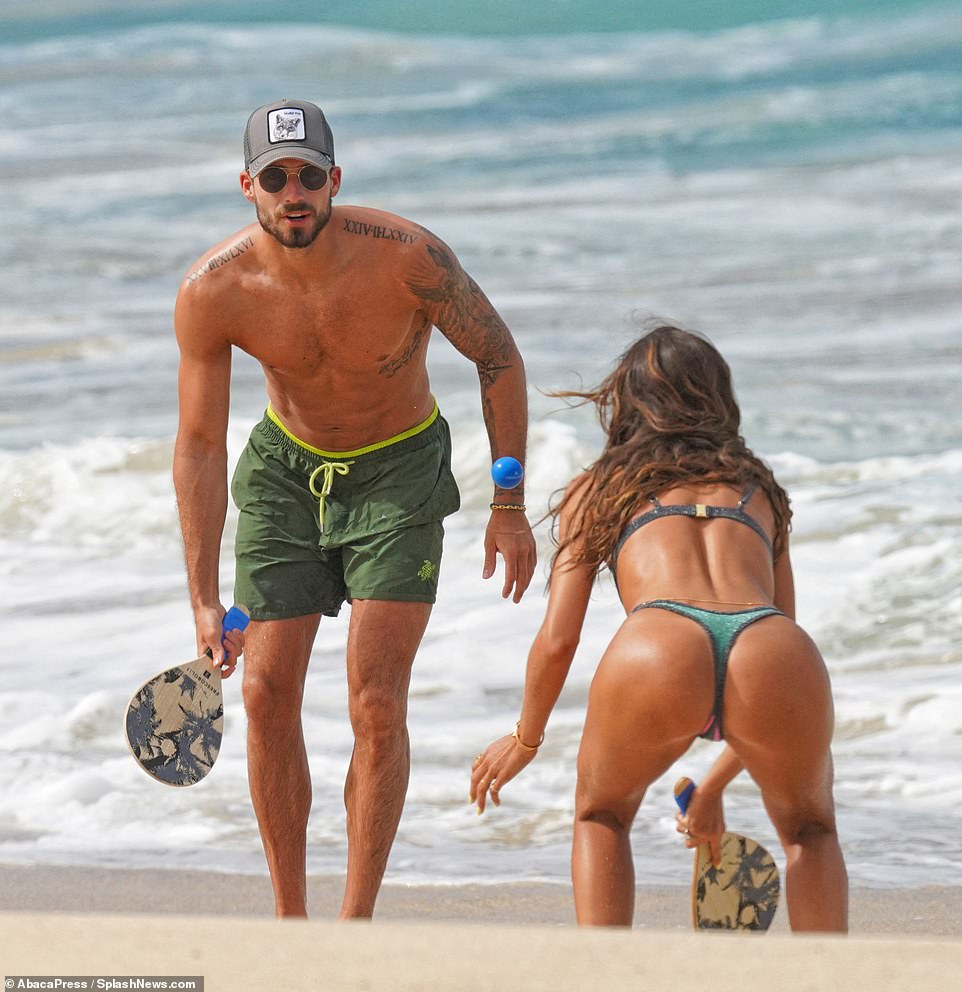 The ball came between them: Here she leaned down low to get the little blue ball as her beau watched 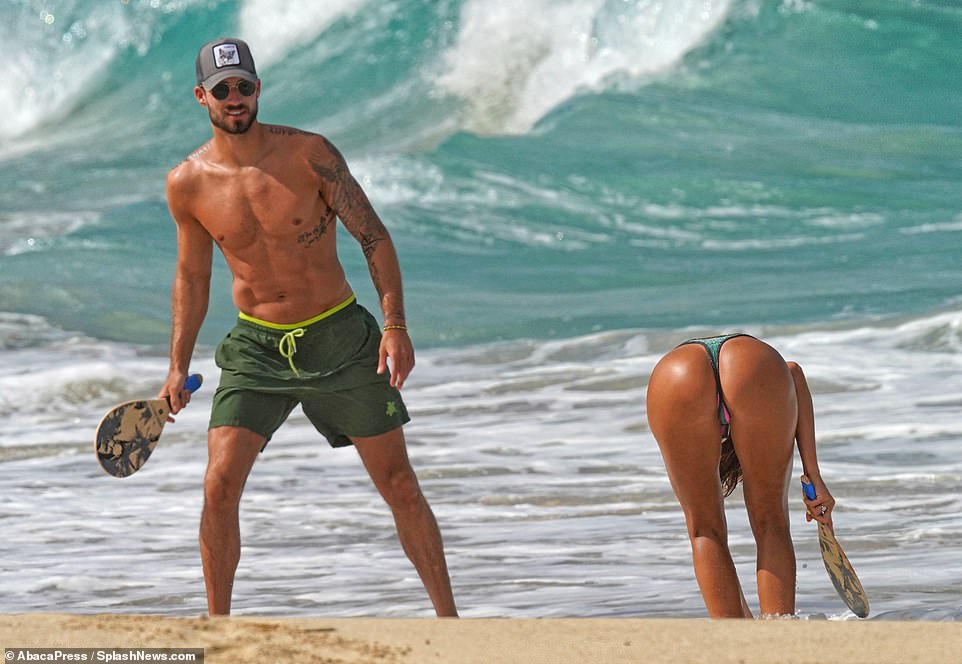 Nope, it didn’t work out: Goulart leaned over as she picked up the ball after missing it with her paddle

They met in at a fashion show in Paris and reportedly began dating in 2015.

Kevin popped the question in 2018 with Izabel sharing the good news on social media writing,”When you meet someone who changes your life in every way, you are sure it’s the right person for you.

The A-list model has an estimated worth of about $21 million, according to NetWorthSpot.com. Kevin’s is estimated at about $30 million.

She got her start as a teenager in her native Brazil.

While shopping for groceries with her mother at age 14, a hairstylist suggested that she should become a model. 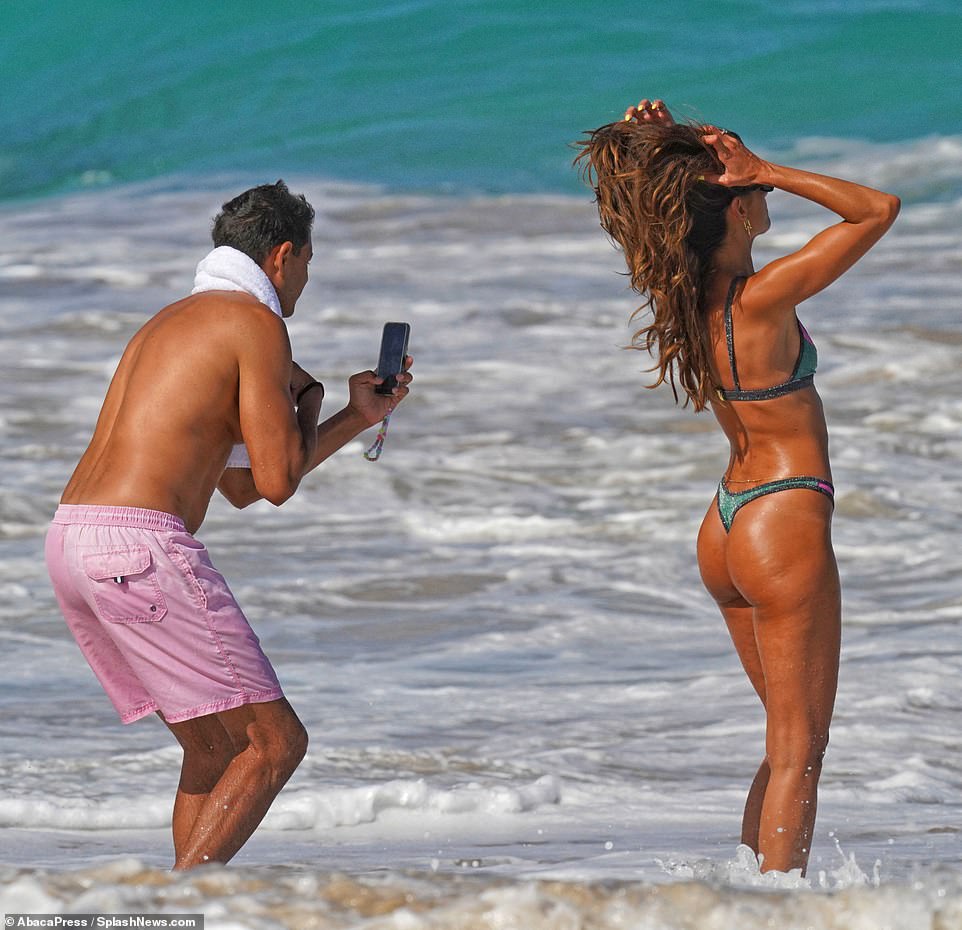 Taking it all in: At one point she was photographed from behind as she pulled up her hair while ankle deep in the water 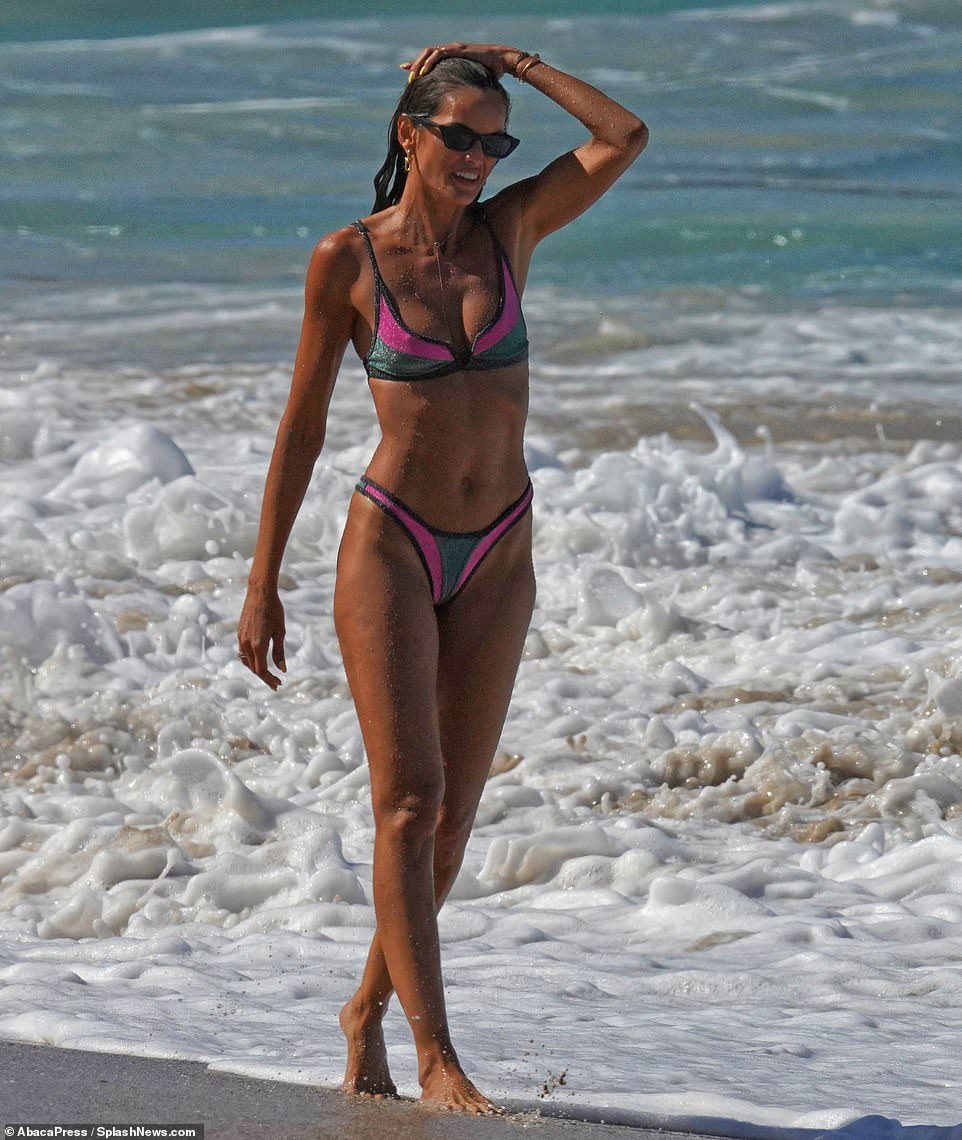 The siren by the shore at sunset: She seemed to be getting tired as the day wore on

Izabel took the profession seriously and decided to move to the state capital, São Paulo.

After that she moved to France to work for magazines such as Marie Claire, but then returned to São Paulo in August 2001 at age 16.

Her career took off when she was under the wing of Ney Alves, currently the director of Major Models Brazil.

The star went on to model for Versace and she has also appeared in Vogue numerous times.

Last year Izabel told Elle Australia about some of the diet tips that have helped her retain her sensational figure.

‘I travel a lot, but when I’m home, I cook every day. In the mornings, I’ll make juices with fruits, vegetables and protein,’ she revealed.

‘I try to keep the foods I put in my body as basic as possible: protein, carbs and vegetables. When I go out, I just try to make the healthiest choices on the menu.’

As far as exercise is concerned she goes for not just weights and kickboxing but also such disciplines as Pilates and running.

‘I tell my trainers… to train me like I will become a professional in that sport. If you have focus, motivation [and] dedication, you can accomplish your goals,’ said she. 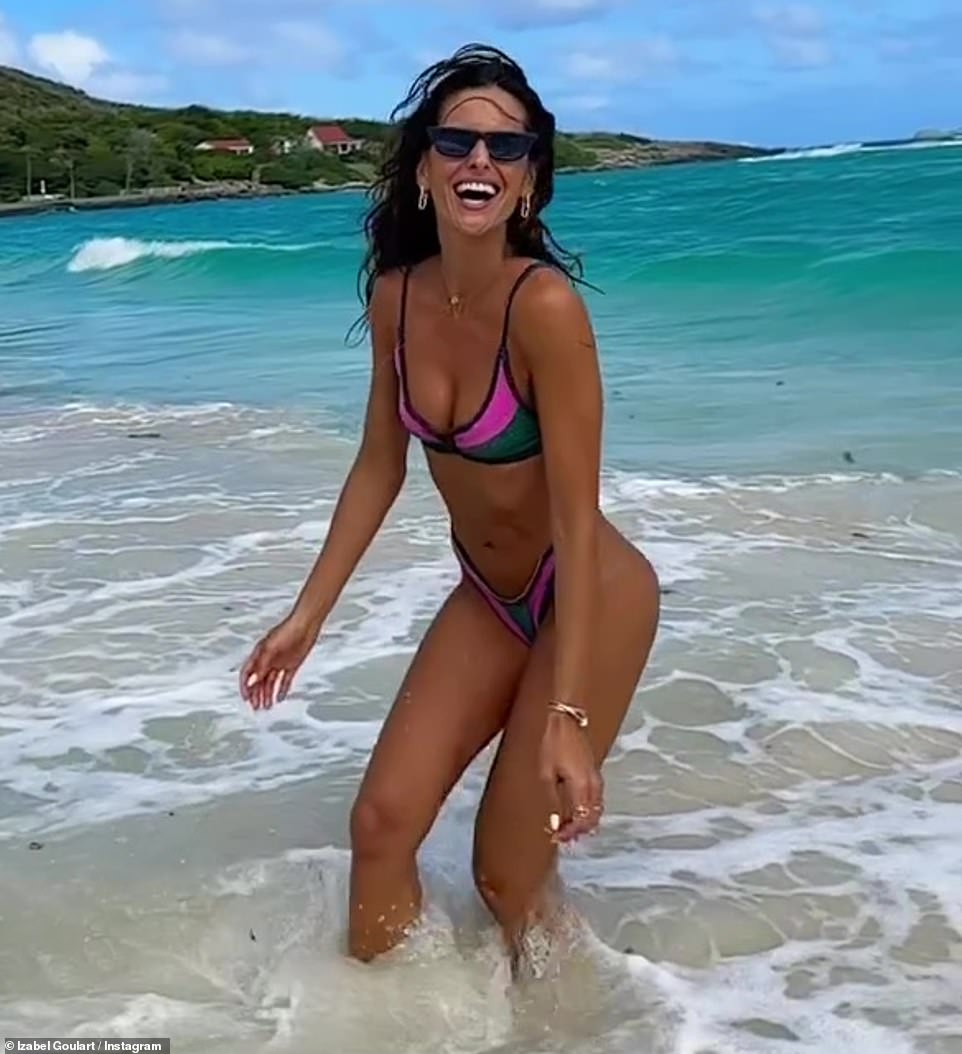 She also shared images on her Instagram page this week: One of the waves crashed into Izabel, causing her to let out surprised laughter

Bikini babe: Her she showed off her backside as she walked into the ocean with her eyes on the horizon