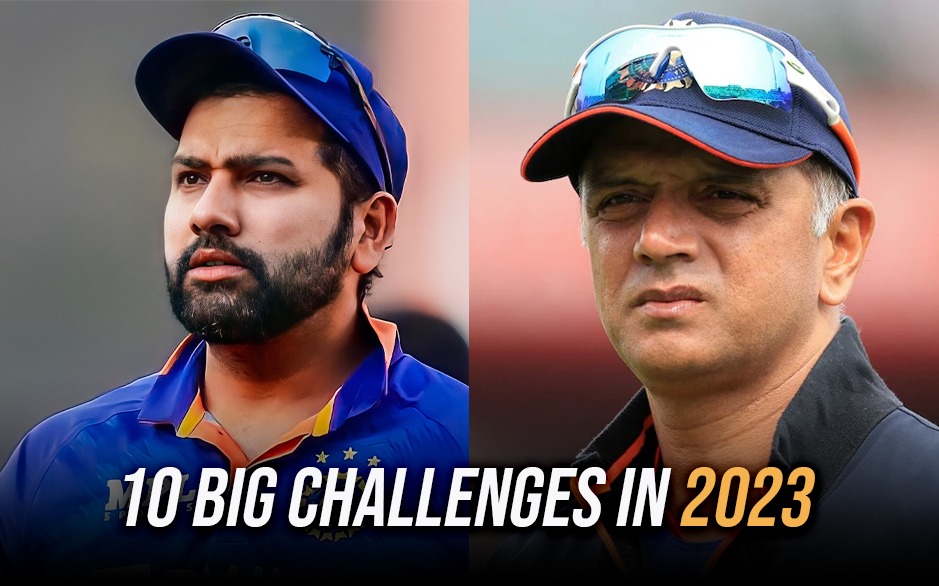 India Cricket Schedule 2023: 2022 draws to a close and India have not had the best of years as far as cricket is concerned. However, the new year comes with renewed hope in what is a pivotal year for the players and the BCCI. The futures of Rahul Dravid, Rohit Sharma and Virat Kohli all hang in the balance in the 2023 World Cup year. The Men in Blue also have the Border Gavaskar Trophy, Asia Cup and a potential WTC Final to play for. Follow Indian cricket LIVE updates on Insidesport.IN

Following India’s T20 WC exit, the BCCI sacked the Chetan Sharma-led selection committee. However, they were then handed a two-month extension with the CAC yet to decide on the new panel. The likes of Maninder Singh, and Venkatesh Prasad are all in the frame to be named. BCCI are also looking at a new T20 selector, to lead their reboot in the shortest format of the game. India have not won the T20 World Cup since their inaugural edition success in 2007. In the two world Cups in 2021 and 2022, India were far from their best. That has led to a growing call for sweeping changes in the format. BCCI are mulling a new captain while a separate coach and selector are also on the agenda. Hardik Pandya is expected to lead the change, with a host of youngsters set to take over from seniors.

India lost the inaugural World Test Championship final to New Zealand in 2021. Two years on, the Men in Blue have another opportunity at the coveted title. While yet to book their place, Rohit Sharma’s side are in pole position to boom their ticket for the game. The WTC is the only trophy missing in India’s cabinet and the Men in BLue could become the first team to win all ICC trophies. India will host the 2023 World Cup late in October. The tournament makes its return to India after 12 years when MS Dhoni’s side won the title. A home World Cup comes with great expectations, and India will be expected to put on a good show. India have not won an ICC title since the 2013 Champions Trophy and 2023 gives them plenty of chance to break the duck.

The India vs Australia rivalry has grown exponentially over the years. With a place in the WTC Final up for grabs, it is expected to be another cracker of a series. India have not lost the BGT in their last three attempts. Australia hasn’t won in India since 2004. An exciting four-match Test series waits.

India had one of their worst Asia Cup performances failing to reach the final in UAE. The seven-time champions will hope to bounce when the tournament returns in the 50-over format. With multiple India vs Pakistan clashes on the line, Rohit and Co will be keen to seal the trophy for a record 8th time.

Rohit Sharma is India’s all-format captain at 35. Given the constant workload and his injury problems, India will have to look for a successor. Hardik Pandya is primed to succeed in T20Is. Kl Rahul meanwhile is the current vice-captain. A decision on the same is expected this year, with the new selection committee in place. Current head coach Rahul Dravid’s contract ends after the 50-over World Cup. It hasn’t been smooth sailing for the former India captain with exits in the Asia Cup and the T20 World Cup. Furthermore, India do not seem the dominant force in Test cricket. A failure to win any of the titles on offer could all but end his reign as India head coach.

Virat Kohli, Rohit Sharma, Bhuvneshwar Kumar, Ravindra Jadeja and Mohammed Shami are all in their 30s. The quartet has been part of the last two t20 WC defeats, while Jadeja missed the 2022 tournament due to injury. KL Rahul as vice captain has struggled to set the pace at the top of the order, while Ashwin and Dinesh Karthik had struggled. While not retired, a call on their T20 future is expected as India pursues their reboot.

England have led the way with split coaching and there are suggestions India could do the same. The Men in Blue have often had VVS Laxman chipping in for Rahul Dravid in 2022. A whole-together T20 side could be better suited to a more modern approach. Dravid or his successor could manage red ball and ODI cricket, while a new coach like Ashish Nehra takes over in T20s.