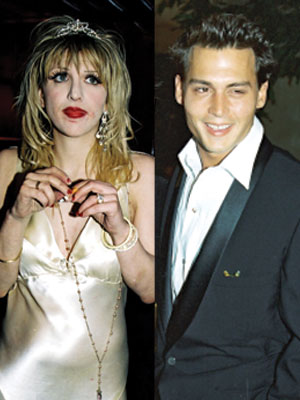 Courtney Love is the latest star to publicly support Johnny Depp amid his court case against Amber Heard. The rocker, 57, revealed that the Pirates Of The Caribbean star, 58, saved her life in a lengthy video shared to YouTube on Saturday, May 21. While the two “didn’t really” know each other, Johnny came to the rescue after she “overdosed” outside of his Los Angeles club The Viper Room back in 1995.

“I don’t really wanna make judgments publicly, but I just want to tell you that Johnny gave me CPR in 1995 when I overdosed outside the Viper Room with Sal,” she began, seemingly referencing writer Sal Cinquemani. At the time, Courtney was battling severe drug addiction as she parented daughter Frances Bean, then 3-years-old, a year after the death of Kurt Cobain. The incident began a seemingly distant, but supportive, friendship between Courtney and Johnny.

“Johnny, when I was on crack and Frances was having to suffer through that with all these social workers, wrote her a four-page letter that she’s never showed me on her 13th birthday. He didn’t really know me,” Courtney explained in the emotional video. The generosity continued later as Johnny took on the role of Captain Jack Sparrow in the iconic Disney Pirates franchise.

“Then he sent limos to her school when all the social workers were crawling around, again, unasked, for her and all her friends to go to both Pirates,” the Live Through This songstress said. “He did it a bunch of times. He gave her her own seat with her name on it. I’ve never seen those Pirates movies, but she loved them. You know, she said to me when she was 13, ‘mama, he saved my life’. And she said it again,” Courtney added.

The emotional message comes amid Johnny’s on-going court case in which he’s suing ex-wife Amber Heard for defamation after Heard published an op-ed piece alleging he abused her. Amber has countersued for $100 million in damages, taking the stand to allege sexual abuse from Johnny following a drunken argument.

Kurt Cobain’s Daughter: Everything To Know About Frances Bean Cobain

Courtney also revealed she has sympathy for Amber in the situation. “I’ve been the most hated woman in America. I’ve been the most hated woman in the world, before TikTok, and it’s really a lot of empathy for what that must feel like for Amber,” she said. “F— man. Can you imagine how that feels? Jesus. But if you use a movement for your own personal gain, and you inhabit queer feminist intersectional spaces, and you abuse that moment, then I hope justice gets served whatever it is,” she said.