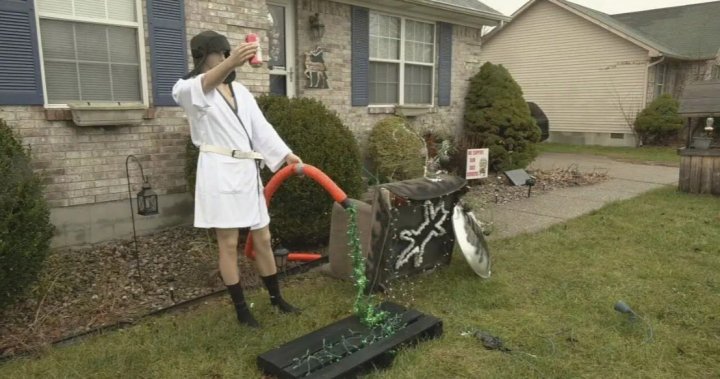 A Kentucky family caused quite the commotion this week with their “Cousin Eddie” Christmas display, prompting a police response after a concerned neighbour called in a half-naked man standing on a lawn.

Officers were tipped off to the Shepherdsville display on Dec. 21 by a dispatcher, who described the scene as “a male standing outside. He is naked. He has a robe covering part of his body. He is exposing himself, and he has a hose between his legs,” reports The Associated Press.

In actuality it was just a mannequin in a robe, set up by two National Lampoon’s Christmas Vacation superfans.

Joni Keeney told Fox affiliate WDRB that she and her husband wanted to bring some chuckles to passersby and set up the display as a tribute to Randy Quaid’s gassy, foul-mouthed character in the 1989 holiday film.

“Everybody has a ‘Cousin Eddie,’ in their family, everybody,” Keeney explained to the outlet.


Kenney said she was able to track down a mannequin and sourced out a white robe and belt, trapper’s hat, cigar and beer can.

The finishing touch was an orange hose — a callback to the scene where Cousin Eddie’s RV plumbing becomes “full” in the movie and he pumps sewage onto Clark Griswold’s property.

Photos of the display also include callbacks to other scenes in the movie — a flipped-over armchair shows the outline of the Griswolds’ cat, who viewers will recall got cooked in an unfortunate Christmas tree light mishap.

Kenney told Fox News that apart from the one call to police, the display had delighted her neighbours and she plans to add to it in coming years. She said she’ll also hang a Clark Griswold mannequin from her roof, too.

As far as the police response, an officer told Fox that they didn’t make any arrests or issue a citation. Instead, they had a laugh and took a few photos.

4:14
Must-watch Christmas movies during the holidays