While my definition of self-care used to include a pint of Häagen-Daz coffee ice cream and No Strings Attached on repeat, I now consider blocking people on social media to be the best gift I can give to myself. Because, quite frankly, no, I don’t want to see a selfie of that one ex-best friend that publicly humiliated me in the middle of my dorm hall all because I caught feelings for her innocent crush. And I’d rather not have access to that 22-year-old man-child I was hooking up with for a couple of months on and off who repeatedly told me he’d be a “better person” but then brought his main chick to my 25th birthday party (who didn’t know who I was, btw) and had sex with our mutual friend. Or that one random beautiful micro-influencer whose pictures my ex situationship always likes—btw, she literally never wronged me and doesn’t know I exist— but makes me question my physical appearance and confidence.

And no, simply muting isn’t the same. TBH, muting is built for those made out of steel. I don’t have the strength to hide these toxic personalities’ content from my feeds or even unfollow them in hopes that I’ll never type out their name in my search bar ever again. It’s not enough for me. It’s not enough for my mental health. My inner demons tell me that I must know the names of my high school ex’s pets or everything about the hotel that one guy that ghosted me after nearly six months of dating tagged in that thirsty vacay gym mirror selfie or whatever I can piece together from my ex-roommate’s (she moved out of our two-bedroom apartment without notifying me and took some of my stuff) Instagram Stories.

On top of that, I don’t want them to have access to moi. That 22-year-old man-child who ghosted me doesn’t deserve to get an inside look at my day-to-day when all he’s done is bring distress and discomfort to my space. This is the social media equivalent of someone falling off the face of the earth and me saying, “good riddance.”

The moment I see a story snippet from that micro-influencer who doesn’t know I exist and momentarily short circuit/boil over with unnecessary anger, is when I know they (and anyone else who makes me feel that way) gotta get the boot.

So tell me why some people are out here trying to say blocking these poisonous humans is wrong? A bunch of my friends have called me out for being “extra” and “dramatic” when I block someone because it “looks” mean and “seems” bitter. It may well be all of those things. But if my bestie’s controlling ex thinks I’m an asshole for throwing him on my block list, so be it. I don’t care. What I do care about? Me and my mind.

It’s frustrating having to defend the art of blocking every time. It really shouldn’t matter to anyone else but me. And let me just spell out this important fact: It’s not wrong to choose me even if it means taking initiatives that may not appear socially acceptable. Sure, it could appear like an act of pettiness. I think the judgment some have about it is because they’d rather not self-reflect on the people they might have wronged in the past. But maybe we need to shift this thinking: Blocking isn’t about the person being blocked as much as it is about the person who is doing the blocking. It’s not you, it’s me! It’s my mental health.

I get it, it doesn’t feel very pleasant knowing someone wants absolutely nothing to do with you. I’ve been on the other side! No, it didn’t feel great when my high school ex-boyfriend who I considered the love of my life at one point chose to banish me off all his socials—especially when the breakup wasn’t even nasty in any way. It actually felt confusing and I felt somewhat betrayed. But! I understood. And if anything, I was thankful he did that because I couldn’t have beared to see him live a normal life without me, whether it was a video of him and his boys shotgunning beers at a random house in the-middle-of-nowhere California or if it was an attempted cool picture of his steak dinner because “phone must eat first.” Perhaps that’s where his head was at too, but I’ll never know—and I accepted that I didn’t need to know.

We’ve been brought up to believe that killing people with kindness is the route to take with enemies, former loved ones, exes, foes—whatever you want to call them. And that “being the bigger person” and not “stooping to their level” will solve just about anything. So does that mean I should have to torture myself with seeing the happy lives of people who f*cked me up in the head because that’s just the nice thing to do? Even though I was the one hurt and disrespected? Why should I save someone’s feelings who clearly didn’t think of mine?

Blocking has given me my power back during times when I thought I had completely lost grasp of it. And no one can make me feel bad for doing it! That group of girls who ostracized me in college over a guy who I was terrified would burn my dorm room down? That one bully from elementary school who all of a sudden wants to be my friend now? You’re all in my block jail. And, let me tell ya, nothing makes me happier. 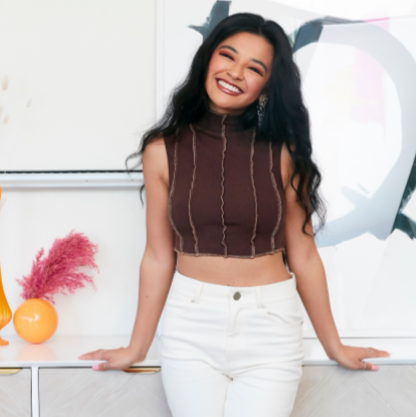 Megan Uy is the assistant shopping editor at Cosmopolitan, where she searches for the best products in all things fashion, home, beauty, sex, gifts, and more, so you don’t have to. When she’s not writing for the site, she’s whipping up some cool and trendy content for the fashion section of the print magazine. She’s been with the brand since 2019 (when she was an itty-bitty editorial fellow), and she’s also written for Delish, House Beautiful, and People. Follow her on Instagram to get some BTS of the editor life and chaotic NYC content. Also, feel free to hit her up if you ever wanna discuss the madness that is TikTok.