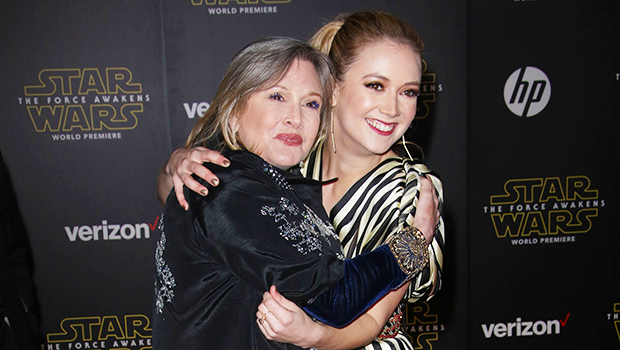 Now that Billie Lourd is a mom of two, remembering her late mother, Carrie Fisher, is that much more poignant. The American Horror Story actress, 30, took to Instagram two days after Christmas to mark the six-year anniversary of the death of her mother, the beloved Star Wars icon who played Princess Leia. “It has been 6 years since my Momby died (feels like 2 but also like 705 at the same time?)” she wrote alongside a sweet throwback pic in a restaurant with Carrie.

Billie then noted how the birth of her second child on December 12 with husband Austen Rydell brought her bittersweet joy. “And unlike most other years since she’s died, this year, these past two weeks have been some of the most joyful of my life,” she continued. “Giving birth to my daughter and watching my son meet her have been two of the most magical moments I have ever experienced. But with the magic of life tends to come the reality of grief.”

The actress explained that her mother’s untimely death on December 27, 2016, left a hole in her family life. “My mom is not here to meet either of them and isn’t here to experience any of the magic,” she wrote. “Sometimes the magical moments can also be the hardest. That’s the thing about grief. I wish my Momby were here, but she isn’t. So all I can do is hold onto the magic harder, hug my kids a little tighter. Tell them a story about her. Share her favorite things with them. Tell them how much she would have loved them.

Most importantly, she shared that she wants others grieving are not bearing the burden alone. “For anyone out there experiencing the reality of grief alongside the magic of life, I see you,” she concluded in the emotional post. “You are not alone. Don’t ignore either. Life can be magical and griefy at the same time.”

Carrie Fisher famously passed away from sudden cardiac arrest at the age of 60 in 2016, two days after Christmas. Her mother Debbie Reynolds died one day later at age 84, per CNN.