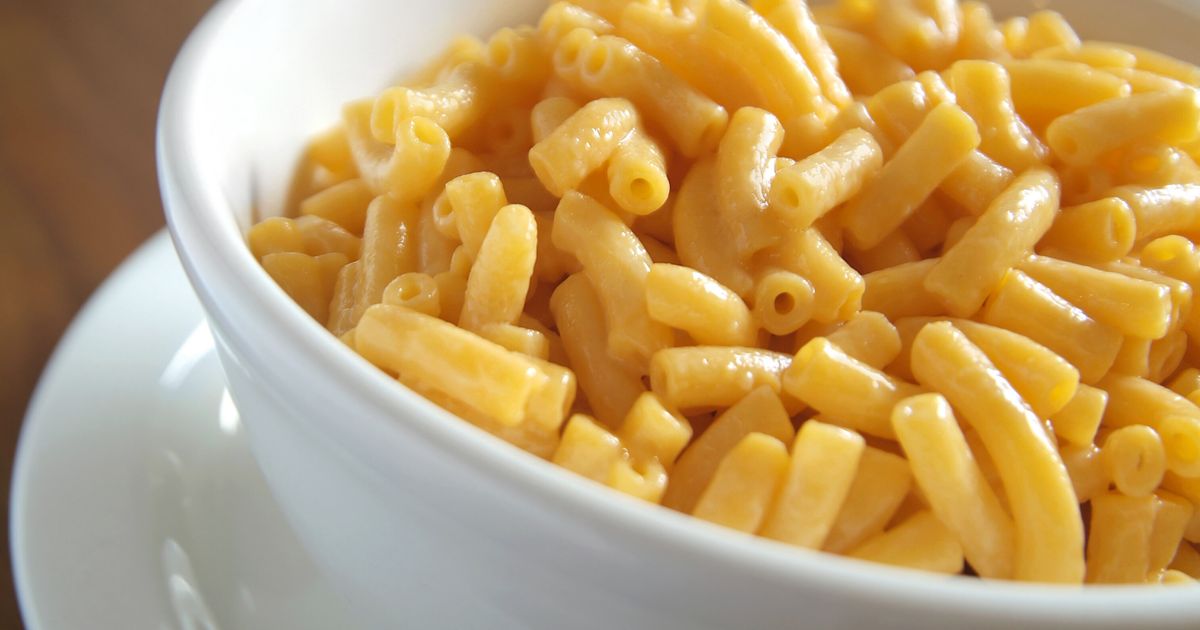 When a product’s been popular for 85 years and counting, you know it’s something that lots of us love to eat, from kids to college students to people who just want a little comfort food at a cheap price.

That familiar blue Kraft box, introduced in 1937 at 19 cents, has lots of competition these days. While some parents try to limit this particular processed food, others are just happy that there’s something their kids will eat. And pediatric nutrition experts have their own thoughts, too.

This product is popular for a reason, and the pickier they are, the more kids tend to love it.

“For many children, especially those with sensory sensitivities, foods with simpler tastes and textures can feel safer for consumption, so mac and cheese fits this bill,” said Crystal Karges, a registered dietitian nutritionist and maternal health child feeding specialist.

RDN Kacie Barnes, founder of Mama Knows Nutrition, said that consistency is one reason for the dish’s enduring popularity.

“A blueberry might be more sweet or sour from berry to berry, for example, but this is something that’s the same every time,” Barnes said.

“It’s soft, easy to eat, and full of sugar and lactose, so it’s sweet and tasty,” said Dr. Dina Kulik, a pediatrician and founder of Kidcrew Medical. “Kids crave carbs because they give you a sugar rush and make you happy from dopamine. But then your body releases insulin to bring sugar down, leaving you craving more.”

Kulik said she’s never seen a mac and cheese brand that she would consider to be “nutritious.”

“Most have tons of salt, no fiber and minimal protein,” she said.

Nicole Celichowski has four kids, ranging in age from 7 to 17, all of them Kraft-loyal.

“We occasionally get Annie’s, store brands and ones with white cheese, which are fine, but not ‘real,’” Celichowski said. “Even the Kraft-shaped versions don’t taste as good. They’re fun, but the texture is all wrong.”

She doesn’t make a fuss about nutritional value here (or the lack of it). “I’ve never looked at the ingredient list, and I never will. It’s a part of childhood and more a cultural choice than a nutritional one.”

Bridget Terry is the mother of two children, ages 1 and 3, and both love mac and cheese. (It’s pretty much predestined, since Terry had a mac and cheese bar at the rehearsal dinner for her wedding.) Her 1-year-old has seen a nutritionist because he’s underweight and struggles with eating.

She’s not picky about brands, and neither are her kids. “I approve of any brand as long as they eat it and it’s not a choking hazard,” she said.

How To Make It A Complete Meal

Even if you start with a base that’s only so-so nutritionally, you can do a lot to make a more complete meal.

“Add iron-containing protein, like meat, eggs or legumes,” Kulik said. “That way, the pasta can be a side dish, with more protein as the meal. Healthy proteins and fats can help prevent the sugar rush-and-crash and leave your child fuller longer, with more sustained energy.”

Karges suggested adding whole-milk Greek yogurt, which “can boost the overall protein content of the dish, as well as make the texture creamier.”

Terry has another protein-forward idea: “We make Italian beef and everyone mixes their shredded meat into the pasta. I try to serve it along with something healthy.”

Jennifer Anderson, an RDN who founded Kids Eat in Color, noted that “balanced meals” have protein, fat, carbohydrates, and color from fruits and veggies.

“Boxed mac and cheese provides plenty of protein, fat and carbohydrates, and adding on color will make the meal even more balanced,” Anderson said. “You can quickly cook some frozen veggies and serve them on the side. Or cut up fruit or serve frozen fruit on the side.”

“Mixes of vegetables like corn, carrots or green peas work great,” said registered dietitian Natalia Stasenko. “Some parents have had success with adding canned pumpkin or a puree made of steamed cauliflower to the cheese sauce.”

“We call it Mac ’n Weens, which is a horrible name, but it suits us,” she said.

Celichowski remembered that when her oldest child was little, she’d add frozen peas to the finished dish. “It added a little bit of nutrition and also helped cool off the noodles. I gave up on that a few years later when the other kids protested at the sight of anything ‘extra’, but my oldest still prefers it with frozen peas.”

A Case Against ‘Sneaking In The Greens’

One of the experts we spoke with raised a caution at the idea of those veggie add-ins.

“Some parents may try to sneak in more vegetables by disguising them in a child’s favorite food, but this isn’t a long-term strategy for supporting a desire to eat vegetables,” Karges said. “Even worse, it could actually make them distrustful of food and eating, which is especially damaging for a child who may already be an anxious, skeptical eater.”

How Often Is Too Often?

How you serve those meals might make a difference, too. Stasenko warned against allowing mac and cheese to be an approved “fallback” option if kids balk at what you’re serving.

“Doing that could override the child’s ability to eat in response to their hunger and satiety,” Stasenko said. “Instead of offering it as a special alternative for a child who refuses a meal, it’s best to include it served family style or help-yourself style, rounded off with options like a salad, fruit, or chicken, and let everyone serve what they want on their plates.”

Anderson reminded everyone to take it easy on themselves. “If you find yourself in a tough patch in life and your child has eaten mac and cheese for 14 days straight, you’re still doing great as a parent,” she said. “When you’re ready, you can start serving more balanced meals again.”

The Best Store-Bought Mac And Cheese

Here are some top picks from nutritionists, parents and kids.

HuffPost may receive a share from purchases made via links on this page. Every item is independently selected by the HuffPost Shopping team. Prices and availability are subject to change.

“This is what I typically buy, because it’s lower in sodium and my family likes the taste,” RDN Kacie Barnes said. “While it is an organic option, that ‘organic’ status doesn’t necessarily mean it’s healthier. However, the ingredients are higher quality than the traditional alternative.”

“This hits the mark with good amounts of fiber, iron, calcium and potassium,” Barnes said. Made with chickpea pasta, it has 25 grams of protein, 13 grams of fiber and half the net carbs of traditional pasta.

“They don’t hit the lower sodium target that I’d like, but they do have significantly more fiber and more vitamins and minerals than the typical boxed mac and cheese,” Barnes said. Each serving has 14 grams of protein, 6 grams of fiber with prebiotics and 21 nutrients from plants.